Coin book find on eBay is a puzzle to book collector 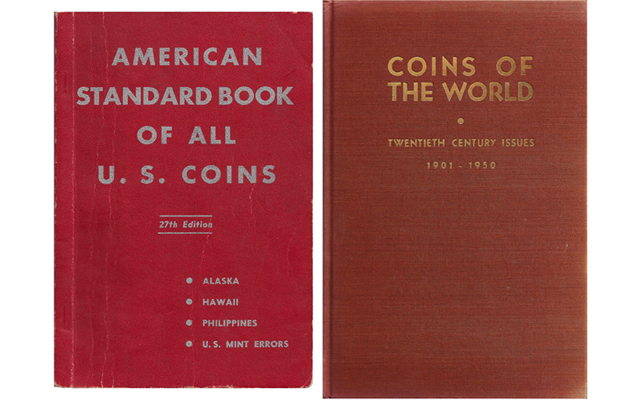 These two images show that the typography looks very similar to that of Wayte Raymond's publications, such as this 4th Edition of Coins of the World, published in 1951.

I was recently on eBay looking for Bibles when I found the American Standard Book of All U.S. Coins. The seller states this is the 27th edition from 1960.

The cover says the book covers Alaskan, Hawaiian, Philippine, and error coins. I have to admit I’m confused on the Alaska part. I never knew Alaska issued its own currency before. I know about Hawaii and the Philippines.

Have you heard of this book?

Your question is a good one. We immediately turned to our numismatic literature columnist (“Numismatic Bookie”), Joel Orosz, for his observations.

“This is a really neat conundrum that I think I may have solved. When I read your message, I wondered, how could there be there have been 27 editions of a book I’ve never even heard of?

“Then when I looked at the book’s typeface it looked just like the typeface used for many years by Wayte Raymond in his The Standard Catalogue of United States Coins, which was the pioneering coin guide book that R.S. Yeoman used as a model when he started the ‘Red Book’ in 1947.

“At first I thought someone bought the rights to The Standard Catalogue from Raymond’s widow, Olga sometime in 1957 or 1958.

“Then that person renamed the book (keeping ‘Standard’ in the title), and also renumbered the editions (perhaps by adding the number of editions of a different guide book he had published to the number of previous Standard Catalogue editions).

“But when I received the book and looked inside, there was nothing to reinforce my conjecture about someone buying the rights.

“In fact, information suggests the publisher, R.A. Wilson Sr., had been publishing variously-titled books like the American Standard Book since 1931, and Wayte Raymond is not mentioned at all.”