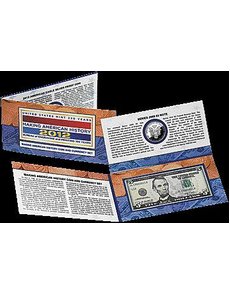 Just three 2012 Making American History Coin and Currency sets have been returned by customers to the U.S. Mint because the serial number of the Series 2009 $5 Federal Reserve note in the set did not begin with the promised digits 150. 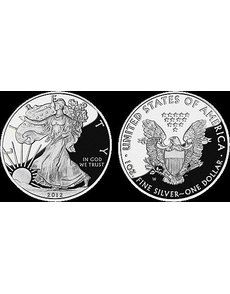 The U.S. Mint’s coin contribution to the set is the Proof 2012-S American Eagle silver dollar. 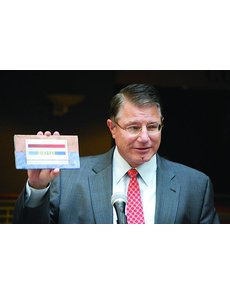 U.S. Mint Deputy Director Richard A. Peterson promoted the availability of the 2012 Making American History Coin and Currency Set at the show in his remarks delivered at ceremonies preceding the ribbon-cutting opening of the ANA convention Aug. 7.

The U.S. Mint is nearly halfway through selling the initial run of 50,000 of the 2012 Making American History Coin and Currency sets, a joint product of the Mint and the Bureau of Engraving and Printing.

The U.S. Mint’s weekly sales report dated Aug. 13 records sales at 24,130 sets, as of that date, via traditional Mint sales outlets: the Mint’s online and telephone order systems, the sales counters at both the Denver and Philadelphia Mint shops and, in the District of Columbia, the sales kiosk at Union Station and the sales counter at U.S. Mint headquarters.

The sets were also sold at the U.S. Mint booth at the American Numismatic Association World’s Fair of Money in Philadelphia. U.S. Mint spokesman Michael White said Aug. 16 that 396 of the sets were sold at the Mint booth at the ANA show Aug. 7 to 11. Those sales are not included in the Aug. 13 weekly sales report total, but will be included in the weekly report for the week beginning Aug. 20, according to White.

The set contains a Proof 2012-S American Eagle silver dollar struck at the San Francisco Mint and a Series 2009 $5 Federal Reserve note with the digits in the serial number beginning with 150, and bearing the L12 designation of the Federal Reserve Bank of San Francisco.

No more than 100,000 sets can be produced based on availability of the notes with the 150 starting sequence in the serial number, but U.S. Mint officials are limiting sales to 97,000 sets, after taking into account returned or damaged sets, or damaged notes or coins.

U.S. Mint Deputy Director Richard A. Peterson said Aug. 7 that the San Francisco Mint had been instructed to produce just 50,000 Proof silver American Eagles for the sets. He said officials may decide to increase the production beyond 50,000, in undetermined increments, depending on customer demand.

Peterson promoted the availability of the set at the show in his remarks delivered at ceremonies preceding the ribbon-cutting opening of the ANA convention Aug. 7.

The set is being offered at $72.95 each without individual customer ordering limits. In addition to the physical sales locations mentioned earlier, the set may be purchased online at www.usmint.gov, by telephone at 800-872-6467, and at 888-321-6468 for speech- and hearing-impaired collectors with TTY equipment. ¦