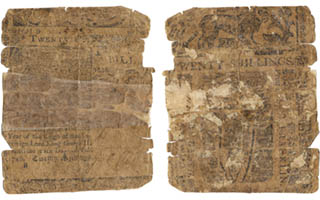 This 20-shilling Delaware note may be a rag of a note because of its rough condition, but it was printed by B. Franklin, and that makes it a relic of one of the most influential men in the establishment of the United States.

Paul Revere printed the bills that paid the soldiers who fought at Bunker Hill. John Dunlap printed Philadelphia bills the year after he set the Declaration of Independence into print on the night of July 4, 1776. Founding Father Benjamin Franklin printed paper money for Delaware, New Jersey and Pennsylvania in his own name from 1728 to 1746.

While it’s possible to pay thousands for top condition pieces or rarities, to a large extent, pieces printed by these patriots can be acquired for a few hundred dollars — sometimes less than $50.

The lower the price, the worse the condition. But a Colonial bill increases in romance with every split, tape repair and notation.

One of my favorite bills is a rag of a note that is tattered, split and repaired, and pasted to another piece of paper.

Despite it all, though, the words PRINTED BY B. FRANKLIN remain bold, making it a relic of one of the most influential men in the establishment of the United States.

The face features a woodcut of the British coat of arms and text, largely unreadable, saying the bill was authorized in the 20TH YEAR OF THE REIGN OF OUR LORD, KING GEORGE II.

The back has a woodcut of a lion, a leaf, the denomination, a warning to counterfeiters and Franklin’s name.

Franklin entered the printing trade at 12 as an apprentice to his brother. At 18 he started his own print shop in Philadelphia.

In 1747, Franklin entered into a partnership with David Hall and retired from active management of the company. In his autobiography, Franklin wrote, Hall “took off my hands all care of the printing-office, paying me punctually my share of the profits. The partnership continued eighteen years, successfully for us both.”

The firm Franklin and Hall printed Delaware and Pennsylvania notes from 1749 to 1764 and is well known to Colonial collectors.

Franklin’s firm hand helped draft and sign the nation’s seminal documents — the Declaration of Independence, the Articles of Confederation and the Constitution.

Bills printed with just Franklin’s name are scarce. No bills are extant from Franklin’s 1728 printing of a New Jersey issue. Few of the others survive and many are worse than my poor bill. None are priced in the “bible” of the series, Eric P. Newman’s The Early Money of America.

Incredibly, bills in Good to Very Good condition often sell for less than $500. Rags like mine can sometimes be found for less than $100, but it takes a lot of looking.