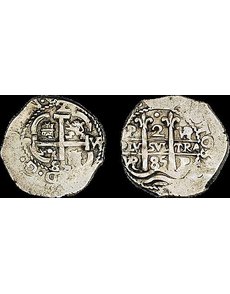 This 1685 2-real cob from the Spanish-American mint at Potosi, in modern day Bolivia, is the same type as a coin in the circa 1704 Castine Deposit, lost on the coast of Maine.

While coppers are much beloved and avidly collected, the small silver coins of the American Colonies and Confederation saw just as much active circulation and deserve a place alongside them in modern cabinets. Among those small silver coins, perhaps the most interesting series to pursue are the cobs, those crudely hammered productions of the mints of Central and South America.

Hammered coins in general, and Spanish-American cobs specifically, dominated the pockets of Americans for more than a century after permanent English settlements were established in 1607.

Milled coins, or pieces struck on a screw press instead of hammered between free-floating dies, were produced in Mexico City beginning in 1732, but the technology wasn’t introduced to other mints in Latin America for decades. The last cobs were coined in Potosí in 1773, ending a series that extends back more than two centuries. Thus, for most of the American Colonial period, most circulating Spanish-American silver coins were in cob form.

Collecting these pieces can be a challenge for modern collectors, who will encounter coins whose dates and Mint marks may not be plainly visible, even on little-worn pieces. Luckily, with some study, the major types are discernible and mints of origin can be puzzled out on even the lowest graded pieces.

Archaeological evidence shows that cobs from nearly every Spanish colonial mint made their way to the future United States, as did the cob-like productions of the Spanish mainland mints. Cobs of Potosí and Mexico, the two most prolific mints, are the most common in American contexts, but even an extremely rare cob from the mint at Cartagena, Colombia, was discovered in the famous Castine Deposit, a circa 1704 hoard uncovered on the coast of Maine.

Though most of the contents of the hoard weren’t documented at the time, an early photograph of the hoard even includes a specimen of the elusive “Star of Lima” 8-real coin, coined in Lima in 1659.

Beyond the circulation of cobs in North America, they were also counterfeited. Indeed, two of the most prominent early American gold coins are essentially counterfeit cobs: the 1786 Lima Style Brasher doubloon and the circa 1787 Standish Barry doubloon.

Silver cobs weren’t immune to counterfeiters, and the works of Kenneth Scott on early American counterfeiting are full of references to pieces of eight, 2-real cobs, and more that were made in base metal and criminally passed in early America.

The best reference on cobs for a beginning collector is The Practical Book of Cobs by Daniel Sedwick, which gives excellent histories of each of the mints that produced cobs and makes identification of cobs fairly easy for anyone from experts to novices.