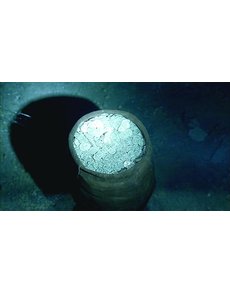 Earthenware container is filled with hundreds of 1792 half dismes, or at least a number of prop coins, in the Castle episode titled “Catch a Clue.” 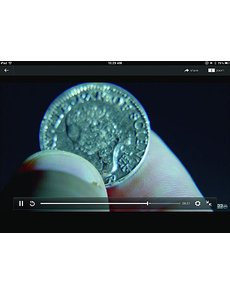 Close-up image shows a fairly decent reproduction of a 1792 half disme in the Castle episode.

A murdered woman found in a dark lane. A New York City police detective and her mystery novelist fiancée. A mash-up of Dan Brown and National Treasures treasure hunt clues. And a container full of 1,000 1792 half dismes? Just another Monday episode of Castle.

Episodes of the ABC TV’s murder mystery series have veered into science fiction conventions, zombies and political conspiracies over the years, all told with the romance-tinged banter of title character Richard Castle, a mystery novelist/police consultant, and New York City Police Detective Kate Beckett. In the episode airing Oct. 28, titled “Get a Clue,” the program’s theme ventured into numismatics, to the delight of collectors, including Coin World columnist and numismatist Joel Orosz.

Coins and fiction are no strangers. Master mystery novelist Raymond Chandler sent private investigator Philip Marlowe in search of a missing Brasher doubloon in the 1942 novel The High Window. A 1913 Liberty Head 5-cent coin was “stolen” in the Dec. 11, 1973, Hawaii Five-O episode, aptly titled “The $100,000 Nickel”; the actual specimen appearing in that episode will appear at public auction in January, when it is expected to bring more than what the 1973 title suggested — a lot more.

The recent Castle episode introduced numismatics fairly early in the story, through a seemingly off-the-cuff comment by a character being interviewed by Detective Beckett and Castle (only in television would a police department permit a mystery novelist, be it Castle or Jessica Fletcher, unfettered access to crime scenes and interviews).

Eventually, the clues lead to a Franciscan order and a secret chamber in their monastery. Inside the chamber is a stone sarcophagus with fresh chisel marks suggesting someone had tried to open it. The sarcophagus is opened after Castle turns a globe.

Inside the sarcophagus is a container filled with a hundreds and hundreds of 1792 half dismes, maybe even a thousand (a scene to make any coin collector’s heart beat a little faster; but what would happen to the market for the half disme?). Castle reaches into the keg of coins and pulls out one for examination; the close-up image reveals a prop coin that is a fairly decent reproduction of the real coin.

Spoiler alert: Eventually the killer is identified as a relative of the victim, who was a descendant of the writer of the 1798 letter and apparently the original owner of the half dismes according to family lore. He wanted the half dismes for himself because the victim did not plan to profit from them. Case solved. Cue the closing credits.

A 1792 half disme expert speaks

So what does an expert on 1792 half dismes think about the coin details airing in the episode? Numismatist Joel Orosz, who along with Pete Smith and Len Augsburger is writing a book titled 1792: Birth of a Nation’s Coinage, weighed in after being tipped off about the episode by Coin World:

“First let’s give writer Christine Roum (according to the Castle entry in Wikipedia) the benefit of the doubt — she was writing for a serio-comic police procedural, not writing for The Numismatist or The American Journal of Numismatics — so we should expect some exaggeration for dramatic effect, not strict fidelity to the facts.

“Second, let’s give Ms. Roum credit for knowing more than the average bear about half dismes. She understands that half dismes, not chain cents, were the first regular issue coin produced by the United States Mint. She has her characters pronounce the word ‘disme’ the way in which most 1790s Americans likely pronounced it: same as ‘dime.’ The obverse of the prop half disme, twice visible in brief close-ups, seems a reasonably faithful reproduction of the original. And although title character Richard Castle’s pronouncement that Martha Washington provided the silver to strike the half dismes is almost undoubtedly untrue, it is a faithful reflection of a pervasive myth about the half dismes of more than 150 years duration.

“With all of this in mind, I won’t dwell on the little things, like Castle’s statement that the Treasury minted the half dismes (in 1792, the U.S. Mint was part of the State Department, not the Treasury); nor the curious decision of the Franciscan order to donate the approximately 1,000 half dismes to the Mint, rather than to museums of the ANS, ANA, or the Smithsonian.

“There are, however, three major numismatic errors that should be detailed.

“Error # 1: Castle says ‘one of these sold at auction last year for 1.5 million dollars.’ No half disme has ever realized that much at auction (although Heritage’s sale of the Starr specimen for $1.41 million in January of this year came close). Presumably Castle was referring to the 2007 transaction between Steve Contursi and the Cardinal Collection Educational Foundation, in which a half disme graded [Mint State] 68 and reputedly once the property of David Rittenhouse was reported to have sold for $1.5 million.

“Error #2: The ‘National Treasure’ aspect of the show — a hoard of 1,000 uncirculated half dismes, each worth $1.5 million, carefully hidden in back in 1798, is finally discovered! — doesn’t quite add up, either today or especially in 1798. Sure, today a thousand uncirculated half dismes would be valuable — but if a thousand of them suddenly came on the market, the value of each would fall significantly from a level of $1.5 million — that’s what happens when you increase supply by a factor of more than ten. And, it must be remembered that back in 1798, with only a handful of coin collectors active in the United States, the value of the half dismes would have been face value — would an earthenware jar filled with $50 worth of half dismes have been considered a ‘National Treasure’?

“Error #3: Castle, in speaking of the creation of the half dismes, says ‘Back then, before the Revolution, it was illegal for anyone but the King to make coins.’ The half dismes, of course, were struck in 1792, nine years after the Treaty of Paris (signed September 3, 1783), brought the American Revolution to an official close. In fact, they were struck after the Confederation government had come and gone, and after the Constitution was written and ratified.”

Orosz concluded, “It was fun to watch and see how Ms. Roum used these fascinating little coins for dramatic effect!”

Orosz indicated that a discussion of the episode will appear in a chapter in the book he, Smith and Len Augsburger are writing (to be published by Heritage).

The episode can be watched at http://abc.go.com/shows/castle. ¦