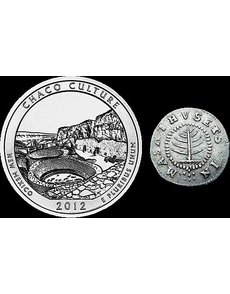 Ask me to give a coin club talk on the brand-new 2012 Chaco Culture National Historical Park quarter dollar, left, and I would scratch my head. Ask me to discuss the Pine Tree shilling, right, and get set to listen for half an hour!

“In today’s milieu of e-mails and texting, the mere mention of letter writing draws haunting stares and anxious twitches. Many people in their twenties have never written a letter and mailed it in an envelope with a stamp on it, albeit some have remitted payments in that manner. Just fifty years ago, letter writing was the predominant method of personal communication. Today it is more uncommon than an Inverted Jenny.

“Even before the effluence of ‘Forever’ stamps, I asked about a dozen people in my office how much it cost to mail a letter (ten of the twelve have graduated college, with an average age of thirty years). Only two of the twelve knew (it was 42 cents at the time I inquired), with the bulk of the others off a penny or two, except for three not having any idea. Responses included, ‘Is mailing a letter the same cost as paying a bill?’; ‘Who mails letters, anyway?’; and ‘The last time I mailed something was for my mother, and she put the stamp on it.’ ”

Does any of this relate to coins?

First of all, you can hardly go a month without reading that coins will become obsolete, if they are not already. The Lincoln cent won’t buy anything on its own, costs more than a cent to produce, and some businesses give them away. The 5-cent coins cost more than face value to make as well. Dimes seem to be OK, at least for now.

Quarter dollars are the dominant coins of the realm.

I have never received a small dollar coin in change. It has been decades since I have received a Kennedy half dollar.

Whether coins will go the way of the dodo and woolly mammoth I know not. If they do disappear, I imagine numismatics will continue its merry course. It has been centuries since 1652 Pine Tree shillings were seen in pocket change, yet they are as hot as a firecracker in the coin market today.

As to Saadi’s comments about intelligent people being clueless about current stamps, you can count me in a related group as relating to today’s coins. Ask me to give a talk on Pine Tree shillings and I could discourse for a half hour or more. Ask me to give a talk on all the commemorative coins issued in the past five years and I would have to scratch my head! I could name a few, but that’s about it! Ask me to name the past and present America the Beautiful quarter dollars and I could say Yellowstone and Yosemite, then a blank stare. I know nothing about Chaco Culture.