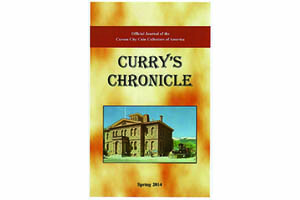 The latest issue of Curry's Chronicle features a number of articles about the coinage of the Carson City Mint.

In the spring 2014 issue of Curry’s Chronicle, the award-winning journal published by the Carson City Coin Collectors of America, members offer insights into how government workers sorted “CC” silver dollars in the GSA Hoard.

The "CC" Mint mark was used on coinage struck at the Carson City Mint in Nevada. The club is devoted to the collecting of the silver and gold coins struck at this branch Mint of the United States Mint.

Other articles in the same issue of the journal analyze Seated Liberty half dollars and prices realized for Carson City coins at auctions in early 2014.

The Carson City Coin Collectors of America is a nonprofit club incorporated in the state of Nevada. It is open to any member in good standing seeking to share and receive information about the Carson City Mint and the coins produced there. Dues are $30 a year, which includes a three-issue subscription to Curry’s Chronicle.