Cloth a familiar cause of interesting 'struck-through' 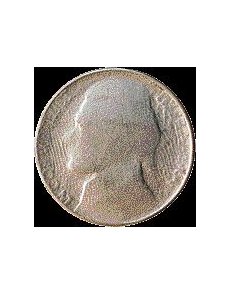 The entire obverse face of this 1964-D Jefferson 5-cent coin was struck through a piece of cloth. A clear impression of the weave was left. 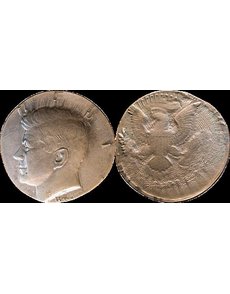 This off-metal Kennedy half dollar was struck on what is probably a 5-cent planchet. The reverse face was struck through a roughly circular piece of cloth that ended up slightly smaller than the final size of the coin. 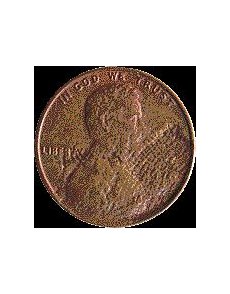 The lower half of the obverse face of this 1976 Lincoln cent was struck through a piece of cloth with a coarse weave. 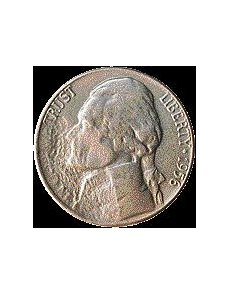 The left side of the obverse face of this 1956-D Jefferson 5-cent coin was struck through a textured foreign object that lacks the weave pattern of a cloth strike.

A vast array of foreign material — much of it unidentified — gets trapped between dies and planchets. If it falls out of the coin (the usual outcome), the resulting depression is called a “struck-through” error.

Objects that leave consistent and easily recognizable impressions are generally more desirable than irregular impressions. Within this subset of patterned impressions, coins struck through cloth hold an elevated status.

When a piece of fabric is struck into a coin it leaves a distinct weave pattern. A typical impression covers the obverse face of a 1964-D Jefferson 5-cent coin that was sent to me some time ago by Alfonso Chio.

It has always been assumed that the fabric is derived from rags used to clean dies and coinage presses. While this is a reasonable supposition, it is by no means a given. After all, how many rags can you recall that have fallen apart into large pieces?

The curious nature of cloth fragments is amply demonstrated by an undated off-metal Kennedy half dollar recently sent to me by Chef Ito. Struck on what is probably planchet for a 5-cent coin, it weighs 5.10 grams. The reverse face was almost completely covered by a large piece of cloth that was roughly circular in shape and slightly smaller than the finished coin. This left a ring of unobstructed, die-struck design encircling the weave impression.

Since cloth would presumably not expand to the same extent as a malleable alloy of copper and nickel, it is entirely possible that the cloth circle started out the same size as a 5-cent blank. This, in turn, raises the possibility that the cloth was introduced well before the planchet reached the coinage press. It may be that a piece of cloth came to rest on one side of the coin metal strip as it was being fed into the blanking press. The blanking die would have sliced through the cloth as it was punching out the blank. The cloth circle remained attached to the blank at least as far as the coinage press.

The fabric could have been introduced even earlier, right after the coin metal strip had been rolled to final thickness. A piece of cloth could have been trapped as the strip was rolled into a coil for subsequent storage and transport.

The density of cloth weave varies, resulting in two basic textures. In the previous two examples, the weave was tight. When the cloth was struck into the planchet, coin metal squeezed through the narrow gaps between the threads, creating a grid of fine ridges. When the weave is loose, you tend to get a checkerboard pattern of elevated squares, separated by shallow grooves. That’s what we see on the lower half of the obverse face of the illustrated 1976 Lincoln cent.

It’s not uncommon for cloth to fold over on itself or to develop pleats prior the strike. The impressions of such folds are easy to spot and enhance the visual effect of such errors.

I have seen many coins with struck-through errors that lack a weave pattern but have nevertheless been optimistically labeled as “struck through cloth.” Such diagnoses should be disregarded, even if the coin has been encapsulated by a reputable grading service. Although the illustrated 1956-D Jefferson 5-cent coin was submitted to me as a struck-through-cloth error, it lacks a weave pattern. It instead shows an irregular, somewhat wavy texture, leaving the identity of the object obscure.

Struck-through-cloth errors are sometimes mimicked by forms of post-strike damage or alteration. One of the more common categories consists of coins that are chemically etched by bits of cloth that have been soaked in acid or some other corrosive solution. These gradually etch a sunken grid into the coin’s surface that can fool the unwary collector unfamiliar with the differences between the real thing and the alterations.

In genuine struck-through-cloth errors, the weave weakens or vanishes over the high relief areas — not so with an acid-etched coin. Genuine examples of the error will also usually show an elevated “wire” rim where the cloth overlaps the rim.