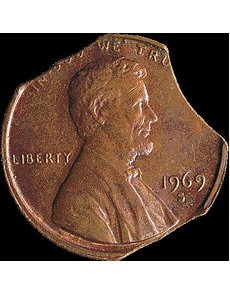 Five curved clips interrupt the circular outline of this 1969-S Lincoln cent. Two pairs of overlapping clips sit at opposite poles. The author has never encountered a U.S. coin with more than five clips. 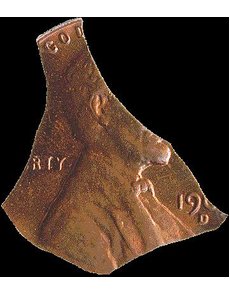 Five curved clips have gobbled up all but a few arc degrees of this partially dated Lincoln cent’s circumference. 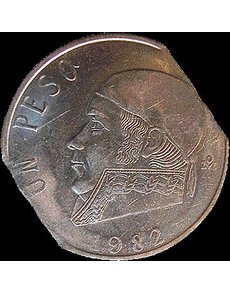 Six curved clips, arranged in overlapping triads, occupy opposite poles on this 1982 1-peso coin of Mexico. 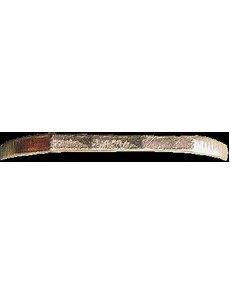 An edge-on view of the Mexican 1-peso coin shows one trio of overlapping curved clips.

A single curved clip is an exceedingly common planchet error. It occurs when a blanking die (punch) overlaps an existing hole in the coin metal strip. The resulting blank incorporates a smoothly curved notch.

I’ve never encountered more than five curved clips on a U.S. coin. For unknown reasons, you’re most likely to encounter such errors among 1969-S Lincoln cents. The example shown here has a large curved clip whose midpoint coincides with the 2:00 position. Two small overlapping curved clips are seen at 11:00, while a second pair of small overlapping clips appears at 5:00. I’ve encountered several other 1969-S cents with precisely the same pattern, although the specific clock positions for the five clips differ.

All of the clips on this coin show abnormal spacing relative to how holes are normally spaced in the coin metal strip once it has passed through the blanking press (this leftover strip is known as “webbing”). The blanking dies are arranged in two or three closely spaced rows, with the dies in each row offset half-a-die-width relative to the dies in the adjacent row. As a result, the space between holes is minimized.

Although some deny it, there’s every reason to believe that strip can also shift sideways, at least occasionally. This can occur if the strip is narrower than the mouth of the blanking press. Tangible evidence for such narrow strips exists in the form of corner clips (intersecting straight clips). Corner clips occur when a blanking die simultaneously overlaps the leading end of the strip and one side the strip (Collectors’ Clearinghouse, Jan. 14, 2013).

For truly exotic clip arrangements, a third mechanism may be at work. It’s possible that a blank will somehow get trapped beneath the moving strip, lag behind and thereby stand a chance of being punched through multiple times. This is also one possible source of elliptical clips (Collectors’ Clearinghouse, July 11, 2011).

One such exotic clip arrangement is seen here on an undated cent with five curved clips. Two large overlapping clips are seen on the right side. A large clip is seen on the left side. A moderate-sized clip is seen at 5:00 and a small clip is located at 7:00, beneath Lincoln’s shoulder. It’s hard to imagine how this arrangement of clips could have been caused by a simple failure of the strip to advance properly.

The maximum number of curved clips I’ve personally encountered is six. They can be seen on the illustrated 1982 Mexico 1-peso coin. Three overlapping curved clips are located in the northeast quadrant and another trio of overlapping clips is located in the southwest quadrant. An edge-on view shows the three clips more clearly. This view also shows the cut-and-tear texture characteristic of many curved clips. This texture is created when the blanking die forces its way through the coin metal strip. The blanking die only slices through the upper half of the strip; the blank actually tears away from the lower half of the strip.

It’s certainly possible for a coin to have more than six clips. A coin dealer in my local area claimed to have had a State quarter dollar with seven clips. However, I never saw the coin and I can’t vouch for the accuracy of his observation. If any Coin World reader comes across a U.S. coin with six clips or a world coin with seven clips, let us know.