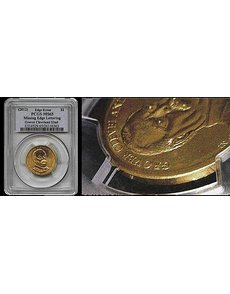 According to Encino, Calif., error coin dealer Fred Weinberg, who owns two of the four dollars, the Grover Cleveland coins are the first Presidential dollars lacking edge inscriptions to appear since the same error was detected on the James Buchanan dollar, which was released into circulation Aug. 19, 2010.

As of Aug. 24, all of the completed transactions for the discovered coins appear to have been conducted by private treaty, though one coin owned by a Wisconsin dealer was being offered on eBay for $2,350 with the “Buy It Now” option. As of Aug. 22, the eBay coin — graded Mint State 64 by Professional Coin Grading Service — had not sold.

All four of the Grover Cleveland, First Term dollar missing edge inscriptions were obtained from rolls of circulation-quality 2012-P coins obtained directly from the United States Mint through its numismatic sales options.

Weinberg acquired the discovery piece from Robert Rongey of Gulf South Coins in Metairie, La., in late July. Weinberg then submitted the coin to PCGS where it was certified MS-65 and encapsulated with the “Missing Edge Lettering” attribution on the grading label.

Shortly after receiving the coin from Rongey, Weinberg purchased a second example, from Alan Lay of A & A Collectibles in Alabama. Weinberg said he also plans to have Lay’s example certified by PCGS.

Weinberg initially valued his coins at $2,500 each when just two examples were known. However, with the eBay offering at $2,350, Weinberg revised his estimates of value. “I’d now say the value would be $2,000, unless more than a half dozen or so are discovered, ...” he said.

Rongey told Coin World Aug. 21 that the Missing Edge Lettering Cleveland dollar he sold to Weinberg (neither dealer would disclose the price paid) had been turned down by a collector who had come into his store July 12 to buy the latest Presidential dollar.

Rongey said he had purchased two $500 boxes of rolled Cleveland dollars from the U.S. Mint and placed a roll of coins from each Mint into plastic tubes from which collectors could purchase single examples.

One collector, who has been purchasing two examples of each Presidential dollar from each Mint, informed Rongey he could not find the Mint mark on one of the strikes from the tube containing Philadelphia Mint coins. When Rongey told him the coin was an error missing the edge lettering, the collector asked for a replacement with edge lettering because he didn’t collect errors.

Rongey said another of his customers reported to him at the Alabama Numismatic Society’s July 20 to 22 annual show in Bessemer that he had also discovered one of the Cleveland dollars missing edge lettering among the pieces he purchased from Rongey’s coin shop the week before.

Lay said the Cleveland dollar that he sold to Weinberg had also been found in a roll from a $500 box of rolled coins purchased by another dealer directly from the U.S. Mint. Lay had purchased two Philadelphia Mint rolls and two Denver Mint rolls from the box during the same Alabama show that Rongey attended.

Jim Essence from Jim’s Coins and Stamps in Madison, Wis., said the Missing Edge Lettering dollar he is offering on eBay was brought into his shop sometime in June by a collector who discovered the error in a roll of circulation-quality dollars obtained directly from the U.S. Mint.

Essence said he didn’t submit his example to PCGS until July 31, which was after Weinberg had submitted Rongey’s example to the grading service.

Tens of thousands of 2007-P Washington dollars were released into circulation sans edge lettering. The general public began dubbing the errors “Godless dollars” since the edge inscription was missing the motto IN GOD WE TRUST. Many of those coins were sold at $250 each and more.

The public criticism about “Godless dollars” being released led Congress in 2007 to order the motto be moved to the obverse or reverse of the coins at the Treasury Department’s discretion. Treasury chose to use the motto on the obverses of the Presidential dollars.

In 2009, beginning with the William Henry Harrison dollar, the motto IN GOD WE TRUST was moved from the edge to the coin’s obverse, below and left of each presidential portrait, next to the president’s dates of term in office.

The edge inscriptions on all circulation-quality Presidential dollars are applied after the coins are struck inside a plain collar. Since the first coins were released in 2007, the U.S. Mint has made changes to how struck dollars are moved from the coining presses to the edge inscription stations.

All four Presidential dollar designs struck in 2007 at the Philadelphia Mint and Denver Mint had the edge inscriptions applied on separate equipment that was located in an area outside the press area of the production floor. The struck coins were transported to the edge inscription equipment in large bins.