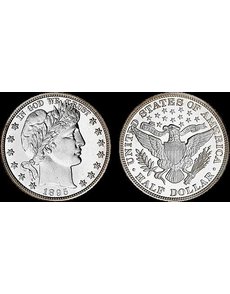 Has this gorgeous and very desirable gem Proof 1895 Barber half dollar remained brilliant ever since it was struck well over a century ago?

A recent letter from Indiana reader John W. commented on an article I wrote in the July 9 issue of Coin World:

“Not only is there a need for a book on ‘conservation’ but there is a crying need, in my opinion, for a complete written discussion and pictorial elaboration on ‘improperly cleaned,’ ‘surface altered,’ etc. as designated by the grading services. Such a project should include every single known technique of cleaning, toning, etc.; all the methods of ‘coin doctoring’ complete with detailed pictures and descriptions of how to identify and accomplish the ‘doctoring’ or whatever one chooses to call it. Sometimes I tend to believe the best identifiers are those who are/were practitioners of the given ‘art.’

“Unfortunately, many of us have had little or no idea what specifically is meant by ‘improperly cleaned.’ Logic would say if there was an ‘improperly’ there should be a ‘properly.’ ”

I have often scratched my head on seeing a holder marked “environmental damage,” “artificially toned” or something else, but not being able to figure out quite what the certification service had in mind. Also, there is such a thing as “good cleaning.” This would involve using inert substances, like water or acetone, to remove grease, grime and residue.

Beyond cleaning there is a separate category of “dipping,” which does not involve friction, but which brightens a coin’s surface.

I believe that each and every Proof Barber silver coin in existence that today is fully brilliant is brilliant because it has been dipped. Such terms as cleaning, dipping, artificial toning and even conservation seem to be “bad” in numismatics, especially if a certified coin is being inspected.

One collector I know who collects rainbow-toned Morgan dollars has scored a number of home runs by buying deeply discounted coins returned marked “artificial toning” by one leading service and sending them to another, to be returned graded with no such mention!

More than just a few treasure-recovered gold coins have had sediment, staining and the like carefully and expertly removed by conservation. Conservation should be practiced only by experts, as over the years more coins have been damaged by such practices than have been improved.

Paintings, furniture, prints, antique autos and many other collectibles are routinely described has having been conserved or restored, which buyers consider acceptable. Not so with coins.

There would seem to be a need for more published information. Coin World readers and others would like to learn more.