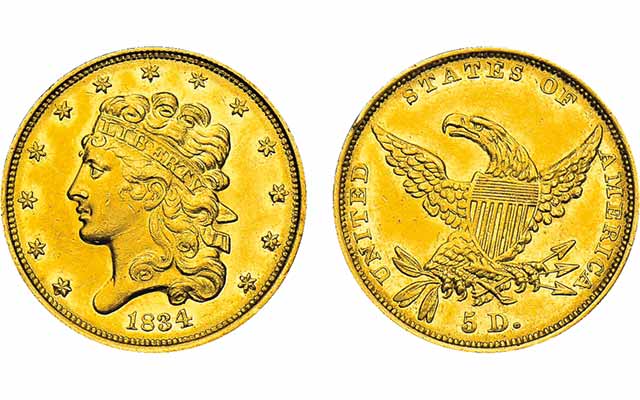 Mint Engraver William Kneass’ Classic Head designs were introduced in 1834 on the $2.50 gold quarter eagle and $5 half eagle.

The Joys of Collecting column from July 27, 2015, issue of Coin World:

The gold coins minted from 1795 into early 1834 were worth more in melt value than the denominations they represented. Most of them made from 1795 to 1820 were exported as trade coins and melted at their destinations, and probably over 99 percent of those struck after 1820 met that fate.

In the 1830s, Sen. Thomas Hart Benton from Missouri took the lead in restoring gold to circulation. This was done by the Act of June 28, 1834, which reduced the gold content of the denominations then being made — the $2.50 quarter eagle and the $5 half eagle.

In the meantime Mint Engraver William Kneass created a design to differentiate the Act of 1834 gold coins. Called the Classic Head design today, the motif was hardly original and was copied from a similar motif used on half cents beginning in 1809 and cents beginning in 1808. The reverse with a perched eagle was not much different from that used before, except that the motto E PLURIBUS UNUM was dropped.

Classic Head quarter eagles were minted in quantity at the Philadelphia Mint from 1834 through 1839, after which they were replaced by Christian Gobrecht’s Coronet design. Half eagles of the new motif were made in Philadelphia through 1838. In the meantime, the three Branch Mints at New Orleans, Charlotte and Dahlonega, authorized by Congress in 1835, were completed and in 1838 began issuing coins. Classic Head quarter eagles with Mint marks are the 1838-C, 1839-C, 1839-D and 1839-O coins. Branch Mint half eagles were the 1838-C and 1838-D piece.

Today a complete set of Classic Head gold coins by date and Mint is a reasonable objective for many numismatists and is well worth investigating. There are no “impossible” rarities, but the C and D Mint coins run into several thousand dollars each in Very Fine and Extremely Fine grades. Nearly all of the great collections in the past had many gold issues in circulated grades. Today, many think that unless a coin is Mint State, somehow it is subpar. Such a guideline is great for modern coins, but hardly applicable for early 19th century issues.

A book on Classic Head die varieties is planned by John McCloskey, who recently retired from many years of editing of the Gobrecht Journal. No doubt, it will create much new interest in the series.