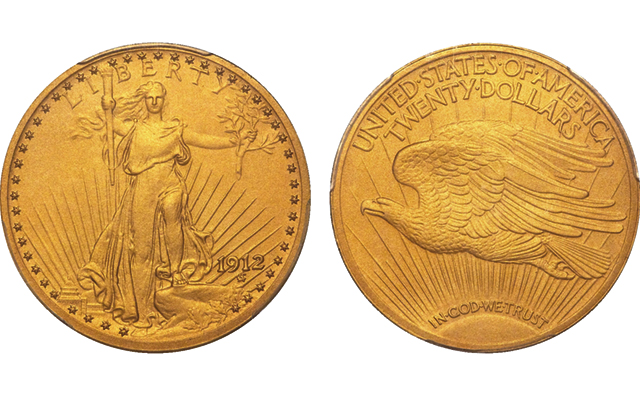 Heritage Auctions is set to offer more than 6,500 lots during its June 4 to 8 auctions held in conjunction with the Long Beach Expo, a thrice-yearly coin, currency, stamp and sports collectible show held at the Long Beach convention center in California.

Leading the auction are several classic key U.S. coins, including two rare $20 double eagles. These will be offered at Heritage’s Premier Session scheduled for the evening of June 5.

An 1854-O Coronet $20 double eagle graded About Uncirculated 55 by Numismatic Guaranty Corp. is one of approximately two dozen known for the issue and is poised to sell at the mid-six-figure price level.

The offering, from the collection of Donald E. Bently and sold for the benefit of the Bently Foundation, represents the first time in nearly 40 years that this particular example will be offered at public auction. It was last sold publicly at a 1975 Bowers and Ruddy auction.

A roster of 21 known 1854-O Coronet double eagles in the catalog places this as among the finest known, bettered by four AU-58 pieces and tied with three other AU-55 examples.

Heritage identifies the offered piece as having a “thin, nearly vertical scratch [that] extends down from star 6 on the obverse, an identifying mark that is clearly visible in the 1975 catalog plate” from the Bowers and Ruddy offering.

Another likely six-figure rarity is a 1912 Saint-Gaudens double eagle graded Proof 67 by PCGS with a green Certified Acceptance Corp. sticker indicating quality within the grade.

It is one of just 74 Proof double eagles struck in 1912, and while estimates on the current number of survivors have historically ranged from 10 to 25 pieces, Heritage states in its catalog description that the actual number of Proof 1912 double eagles extant in all grades is between 40 and 50 coins.

The description notes the unique look of the short-lived Sandblast Proof finish.

The firm writes: “The finish of this piece shows nearly monochromatic mustard coloration over both sides, though close inspection reveals occasional hints of olive-gold. Magnification shows myriad tiny sparkling facets from the sandblast surfaces. This sparkle gives the coin a ‘life’ and sheen that serves as a perfect counterbalance to the otherwise deep coloration on the piece. Unfortunately, this ‘sandblast’ finish proved as unpopular with collectors as the matte and Roman finishes of earlier years, and many of the coins went unsold, to be melted after the end of the year.”