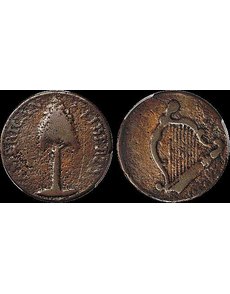 This 1776 New Hampshire copper, formerly in the Garrett Collection, will be offered in Stack’s Bowers Galleries’ March auction in Baltimore.

An early American coin with a pedigree dating to the mid-19th century will return to the marketplace for the first time since 1980 in an auction set for March.

Off the market since the Garrett Collection auction in 1980, a 1776 New Hampshire copper will cross the auction block in the Rarities Night portion of the Stack’s Bowers Galleries auction held in conjunction with the Whitman Coins & Collectibles Expo in Baltimore.

The auction will take place March 21 to 24 with the Rarities Night session scheduled for March 22.

The fame of this coin precedes it. The 2012 edition of A Guide Book of United States Coins illustrates it on page 55. In The Early Coins of America, by Sylvester S. Crosby, the identical piece is shown on a Heliotype Plate VI, No. 3. In The Whitman Encyclopedia of Colonial and Early American Coins it is cataloged as W-8395.

Its earliest illustration was in the first large book ever printed on the subject, the American Numismatical Manual, by Montroville S. Dickeson, 1859. The coin was then the property of Matthew Stickney, who called it one of the three rarest coins in his collection (which at that time included the first 1804 Draped Bust silver dollars to be privately owned, obtained by Stickney from the Mint in 1843).

Cast in copper and weighing 154.9 grains, the New Hampshire copper has been graded Very Good 10 Secure by Professional Coin Grading Service. When cataloging the Garrett Collection in 1980 Q. David Bowers graded it similarly.

The history of this rare copper New Hampshire coinage is fairly well documented in the literature, especially in Crosby’s 1875 book, still a standard reference today in 2012, which reproduces the enabling legislation in the New Hampshire House of Representatives, March 13, 1775, and includes other valuable information relating to the origin of the first of the state copper coins.

The issue was intended “for the benefit of small change,” as Continental currency bills were “so large.” It was recommended that 108 of the coppers be equal in value to one Spanish milled dollar — thus setting the weight as about twice that of a British halfpenny and perhaps characterizing the New Hampshire copper as a penny (although no denomination was specified).

Walter Moulton was empowered to coin as many as might amount to 100 pounds in weight, subject when made to the inspection and direction of the General Assembly before pieces were made for general circulation.

On June 28, 1776, the House of Representatives voted that the colony receive into the Treasury, in exchange for New Hampshire bills, “any quantity of Copper Coin, made in this Colony, of the weight of five pennyweight and ten grains each, to the amount of any sum not exceeding 1,000 pounds of lawful money. … [The] coppers shall have the following device, viz: A Pine tree with the word American liberty on one side and a harp and the figures 1776 on the other side.”

Although no doubt the proposal generated enthusiasm at the time, a coinage in quantity did not materialize. It can be theorized, however, that some from the early coinage were made for distribution to the Legislature. At the time the seat of government was in Exeter. In the same year, but slightly later on the calendar, Massachusetts contemplated a copper coinage, but, again, no quantity production ensued.

It was not until 1785 when state copper coinage became a reality with the introduction of Connecticut issues, followed by New Jersey in 1786 and Massachusetts in 1787. The Republic of Vermont, an independent entity (not a state until 1791), contracted for its own coppers, which were made from 1785 to 1788.

The obverse of the 1776 New Hampshire has a standing pine tree at the center with AMERICAN LIBERTY around, in keeping with the legislation. Pine trees were a feature of the state, and the district called King’s Wood was a source of masts for the Royal Navy when the state was a colony and part of Great Britain. The reverse with a harp and 1776 also conforms to the legislation.

Of the few extant, one example is in the National Numismatic Collection in the Smithsonian Institution and another is held in the American Numismatic Society collection. “Here is one of the most extensively pedigreed, most famous coins associated with the tradition of early American coinage,” Bowers noted. “For an advanced cabinet, private or museum, this will be one of the greatest acquisitions of our time.”

More than 6,000 lots of United States coins, paper money and Americana will be crossing the block in the Stack’s Bowers March auction. For further information on the 1776 New Hampshire copper, or on how to participate in this sale, check the website www.stacksbowers.com or contact Christine Karstedt, executive vice president, at Ckarstedt@stacksbowers.com. ¦