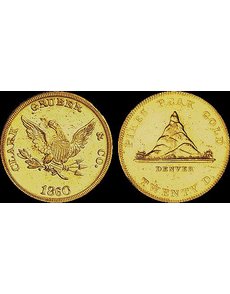 Paul Song of Bonhams said that copper and “gilt” copper patterns of the rare Clark, Gruber & Co. coin issue are frequently offered in the marketplace, with regular-issue examples very rare, no matter the condition. Fewer than 20 genuine examples of the gold coin are believed to exist today. “Because of the rarity of this American territorial coin, I have only seen images of it in books. In the 20 years of my experience this is the first time I have handled one,” Song said.

Prior to 1864, it was legal for private individuals to mint gold coins of their own design. Since the value of an individual coin was based upon its intrinsic value of precious metal, coins of accurate fineness and weight manufactured by private firms were usually accepted at full value. In fact, several privately issued gold coins were more readily accepted in certain regions than was federal coinage.

The last gold mining region in the United States where pioneer gold coin were minted was the Territory of Colorado, from 1860 to 1862. By far, the most successful private minter in the Pikes Peak region was Clark, Gruber & Co. of Leavenworth, Kan. The banking portion of the firm’s operation opened for business in Denver City, Colo., on July 10, 1860, making it one of the earliest banking houses in Colorado Territory.

The firm’s issues included a large Clark, Gruber & Co. gold $20 coin that is slightly larger and heavier than the $20 U.S. gold coin of the same era.

The obverse features a highly inaccurate depiction of Pikes Peak, surrounded by the phrase PIKES PEAK GOLD and the denomination TWENTY D. listed below. DENVER appears just under the mountain.

The design mix-up (Pikes Peak as depicted on the coin looks more like a volcano than the actual mountain) is explained by the fact that the dies were probably prepared in New York by a the die maker who likely had never been to Colorado or seen the majestic mountain.

The reverse displays a centrally located eagle with outstretched wings, surrounded by CLARK GRUBER & CO.; the date 1860 rests below.

The catalog is posted for free online at the firm’s website, www.bonhams.com.