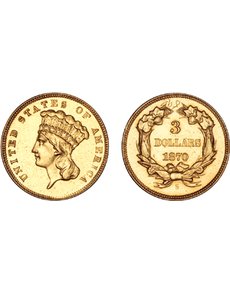 While many numismatists consider the 1870-S Indian Head gold $3 coin to be unique, evidence suggests that two pieces were struck.

After reading the article in the Nov. 26 issue of Coin World concerning Indian Head gold $3 pieces, and in particular the 1870-S coin, I felt it necessary to add a few thoughts, and facts, concerning the history of this coin that is said to be “unique.”

For those who do not have access to the Coin World issue of Oct. 15, 2007, page 74, Nancy Oliver and I wrote an article titled, “Missing papers help rarity remain a mystery,” allow me to repeat a few things from that research on the 1870-S gold $3 coin.

To begin, the coin was struck by San Francisco Mint Coiner Joseph Breck Harmstead, and according to a telegram sent to Mint Director James Pollock from San Francisco Mint Superintendent Oscar LaGrange, only one was struck to place into the Second San Francisco Mint’s cornerstone. However, Harmstead decided on his own to strike another piece for his niece in New York — as a nice gift for his brother’s 24-year-old married daughter, Georgine. Proof of this gift comes from a letter written by Harmstead that accompanied that coin.

Unfortunately, intense research into this letter’s present location has gone for naught, by us and by other noted researchers including Coin World staff member William T. Gibbs. Why did the letter disappear, for it authenticated the piece’s provenance and dispersal? I believe that someone wanted to maintain the coin’s supposed uniqueness.

As to the coin itself, I agree that it does show definite signs of once being a jewelry piece. I have also surmised that since Mr. Harmstead was the coiner at the time, he would have known from what gold bar the $3 pieces were struck. The 893 digits on the reverse note that the coin was of 893 gold fineness, and that the gold came from the Feather River area in California.

As far as it being a “rumor” that an 1870-S piece resides in the Second San Francisco Mint’s cornerstone, in April of 2004, our research into the National Archives in Washington, D.C., revealed a complete listing of the coinage placed into the cornerstone. Amongst other extreme rarities was listed a piece of the 1870-S gold $3 coin — a confirmation of Harmstead’s letter that one piece was placed into that stone’s casket. Additionally, there is absolutely no evidence that the Mint’s cornerstone was at one time discovered and opened, as has been theorized to explain the gold $3 coin’s sudden appearance in 1907. The area where the cornerstone was placed has never been touched, but continues to interest those who wish to unearth it and reveal its contents — possibly some day in the near future.

Also, since we have researched Joseph Harmstead’s life, and published a work on him (Sentiments and Aspirations of a 19th Century Tradesman — A Biography of Joseph Breck Harmstead published in 2005), our conclusion is that Georgine Marcus (Harmstead) was the person who sold the coin to Harry Van Camp in New York City in 1907. By 1900 Georgine was a widow, and lived in New York with a married daughter until she passed away in 1910.

Lastly, I will finish with our 2007 article’s last paragraph, which says, “Because of the evidence to the contrary, we question that bold statement (that it is ‘unique’), and will continue to do so as long as the cornerstone of the second San Francisco Mint remains undisturbed within the gray granite walls of that magnificent structure.”

Richard G. Kelly is a columnist for The Numismatist and freelance numismatic author. He, along with Nancy Oliver, is a frequent contributor to Coin World.