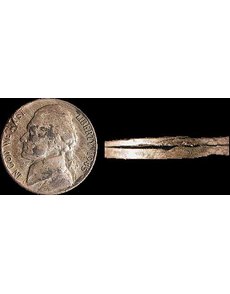 This 1945-P Jefferson 5-cent coin shows a clamshell split on its left side. Like many Wartime Alloy 5-cent coins, the constituent metals are poorly mixed and the surface is riddled with lamination errors. 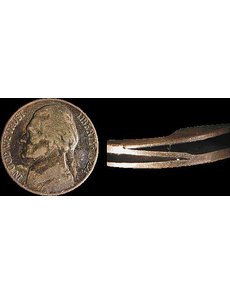 Two clamshell splits can be seen on the edge of this 1944-P Jefferson 5-cent coin. 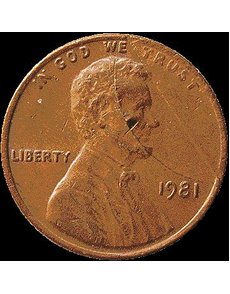 This 1981 Lincoln cent shows a folded-over and struck-in lamination flap on the obverse face. Arising from the same fundamental cause as clamshell splits, lamination flaps are simply thinner. 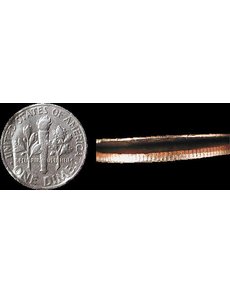 An inadequate bond between clad layer and core led to the formation of a clamshell separation in this 1965 Roosevelt dime. It’s impossible to determine whether the separation developed before or after the strike.

Coins and planchets that split along the horizontal plane are often lumped into a single category, the “clamshell split.”

However, this term should really be restricted to solid-alloy coins like cents, 5-cent coins and silver-alloy coins minted before the 1965 compositional change. In the case of clad-composition coins, the proper term should be “clamshell separation.”

While clamshell splits and clamshell separations are similar in appearance, these two planchet errors arise from entirely different causes.

A clamshell split is an alloy error in which a planchet or coin cleaves along the horizontal plane. The illustrated 1945-P Jefferson, Wartime Alloy 5-cent coin is a representative example. Many splits of this nature are thought to be caused by the presence of contaminants in the alloy.

A horizontal split can also be caused by an inadequate mixing of the constituent metals. This can leave a zone of weakness at the boundary between layers containing different proportions of metals. Wartime Alloy 5-cent coins — composed of 56 percent copper, 35 percent nickel and 9 percent manganese — are especially prone to clamshell splits and assorted types of “lamination” errors. The illustrated specimen clearly shows a poorly mixed alloy. The surface is marked by numerous lamination cracks and missing lamination flakes.

More than one plane of weakness can occasionally develop in a solid alloy coin. The illustrated 1944-P Jefferson 5-cent coin shows a double clamshell split on the edge.

When a split extends completely across a planchet, the two halves go their separate ways. If one or both hemi-planchets eventually make their way into a coinage press, you end up with a “split-before-strike” error. If a coin splits into two halves after the strike, you then have a pair of “split-after-strike” errors.

As mentioned earlier, clamshell separations are the exclusive province of clad-composition coins. A clamshell separation is a bonding error — a failure of one clad layer to bond to the core. In the bonding process used for contemporary, circulation-quality dimes, quarter dollars and half dollars, two coils of thin copper-nickel clad strip are bonded to a thicker coil of pure copper strip. Bonding occurs well above the melting point of both copper and nickel, as the three strips are forced together under enormous pressure between two rollers.

If pressure is inadequate, or if the facing surfaces of adjacent strips are not meticulously cleaned, a secure bond may not form. Once the blank is punched out, the poorly bonded clad layer can separate before or after the strike. A partial separation is the same thing as a clamshell separation. A typical example is shown here in a 1965 Roosevelt dime.

When a bond fails completely on a planchet, the clad layer assumes an independent existence. If it manages to reach a coinage press, it will emerge as a “struck clad layer.”

If a clad layer separates after the strike, it is also often called a struck clad layer. However, it would be more appropriately classified as a “separation-after-strike” error.

On very rare occasions a copper core will split along the horizontal plane, creating a “split core” error. Since the split occurs within a zone of solid metal, these kinds of errors are rightfully classified alongside clamshell splits and split planchet errors.