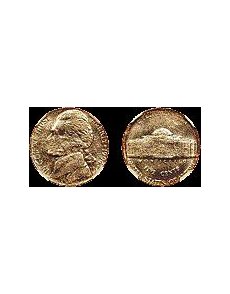 This 1994-P Jefferson 5-cent coin was struck on a nonstandard copper-nickel clad planchet that weighs only 2.14 grams. 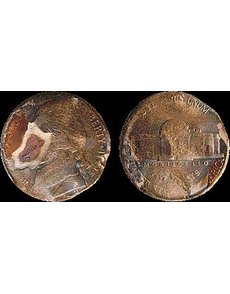 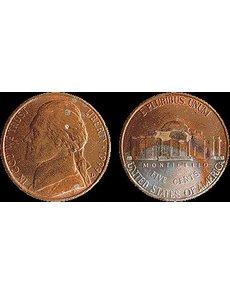 This 1999-D Jefferson 5-cent coin was struck on an improperly annealed planchet. It weighs a normal 4.99 grams.

Coins struck on copper-nickel clad planchets belonging to another denomination are a well-known category of off-metal/wrong planchet error. A 5-cent coin struck on a dime planchet would be one example.

Beyond these two categories is an array of off-metal errors that represent neither a known copper-nickel clad denomination nor an identifiable wrong stock error.

The 1994-P Jefferson 5-cent coin shown here is one such example. Currently in the possession of error dealer Jon Sullivan, it was struck on a very thin, slightly undersized, seemingly copper-nickel clad planchet. According to Numismatic Guaranty Corp., it weighs 2.14 grams. Dime planchets average 2.27 grams while a 5-cent coin on dime stock error would weigh around 3.18 grams.

The obverse and reverse faces of the coin are weakly struck and show an oddly rough, largely unbroken expanse of copper-nickel (a narrow ring of copper is exposed at the outer margin of each face). The edge shows only copper — a departure from standard copper-nickel clad planchets. During the normal blanking process, a little bit of one copper-nickel clad layer is dragged over onto the edge as the blank is driven into a hole in a perforated base plate.

Other purported nonstandard copper-nickel clad planchets have clearly been misdiagnosed. A case in point is a full-diameter 1993-P Jefferson 5-cent coin sent to me by Travis Bolton. It was encapsulated by NGC and described as being “struck on a 2.5 gram defective clad planchet.” Its actual weight is 2.14 grams — exactly the same as Sullivan’s coin. But there the resemblance ends.

Bolton was skeptical of the description and sent the coin to me after cracking it out of its plastic slab. Examination of the edge showed only nickel-colored metal; there is no trace of the expected copper band. Where a thick flake has spalled off the obverse face, there is no evidence of a copper interior. Instead there is only dull, grainy metal consisting of a white outer ring and a brown center.

The obverse and reverse face consist of a mixture of colors — bright nickel, bright copper and pale mottled brown. This piebald pattern is consistent with an improper annealing error.

When normal 5-cent planchets are exposed to excessive or prolonged heat, or when oxygen floods the annealing oven, the constituent metals tend to migrate and segregate out into relatively pure layers and patches. The effect is well-demonstrated in the illustrated 1999-D Jefferson 5-cent coin. Two thick flakes have spalled off the reverse face, revealing a dull, grainy, chocolate-brown interior that clearly does not represent a copper core. This is further demonstrated where a thick flake has spalled off the uniformly copper-colored edge, revealing a nickel-colored interior.

If we assume that Bolton’s 1993-P 5-cent coin is improperly annealed, does this also mean it started out as a normal 5-cent planchet? Could enough metal have been lost during the annealing process to reduce its weight by half? I suspect the answer is “no” on both counts.

While improperly annealed 5-cent coins can be significantly underweight (as much as 0.5 gram), a loss of 2.86 grams seems excessive. Any loss of metal from the surface should have affected the edge as well, shrinking the planchet considerably.

Bolton’s coin could have started out as a rolled-thin planchet or a foreign planchet that then hung up in the annealing drum. I have seen some commemorative 1982 Canada Constitution dollars struck on some very undersized (presumably foreign) planchets that were improperly annealed and similar in appearance to Bolton’s coin.