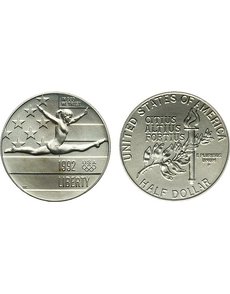 The reverse of the 1992 Olympic copper-nickel clad half dollar was designed by Steve M. Bieda, a Michigan state senator and avid coin collector who is also legal counsel to several numismatic organizations.

The United States commemorative coin program was ushered in with the World’s Columbian Exposition half dollars of 1892 and 1893.

After a flurry of issues in the 1930s, the program ended in 1954 with the final Booker T. Washington/George Washington Carver commemorative half dollar.

The tradition was resurrected in 1982 with a handsome 90 percent silver half dollar honoring the 250th anniversary of George Washington’s birth.

The next commemorative half dollar — the 1986 Statue of Liberty — was struck in a copper-nickel clad composition that contained no precious metals.

In many ways, commemorative half dollars are my favorite modern issues as they continue in the rich tradition of the 1892 to 1954 issues. As I see it, artists have had better success in creating coherent and attractive designs on the half dollar than for other commemorative coin denominations.

A half dollar honoring the 1989 Bicentennial of Congress ends the 1980s half dollar set, while the 1990s group starts off with the popular 1991 Mount Rushmore 50th Anniversary half dollar.

Next up is a half dollar honoring the 1992 Olympic Games. The reverse of this piece is noteworthy, as it was designed by Michigan State Sen. Steve Bieda, who is an avid coin collector and currently serves as legal counsel for several numismatic organizations.

The keys to the modern copper-nickel clad commemorative half dollar series are the two 1996-S half dollars struck for the Summer Olympic Games in Atlanta.

With low mintages of just 49,533 for the Swimming half dollar in Uncirculated and 52,836 for the Soccer coin in Uncirculated, these are the heavy hitters with prices around $150 for each.

A semi-key coin is the 1995-S Civil War Battlefield Preservation half dollar, which has a relatively low combined Proof and Uncirculated mintage of just under 450,000. Examples trade for about $50 each.

In comparison, the 2001 Capitol Visitor Center half dollar has a combined mintage of just 177,119 pieces, yet examples can be easily found for $25. Thankfully, the Civil War half dollar and the two 1996 Olympic Games half dollars are the only price-stoppers, as the rest of the coins in the modern commemorative half dollar series can be purchased for less than $25.

The resulting set is a nice presentation that lacks the daunting numbers of the modern commemorative dollar series and also the sensitivity to fluctuations in value based on the price of bullion.

Steven Roach is associate editor of Coin World. E-mail him at sroach@coinworld.com.