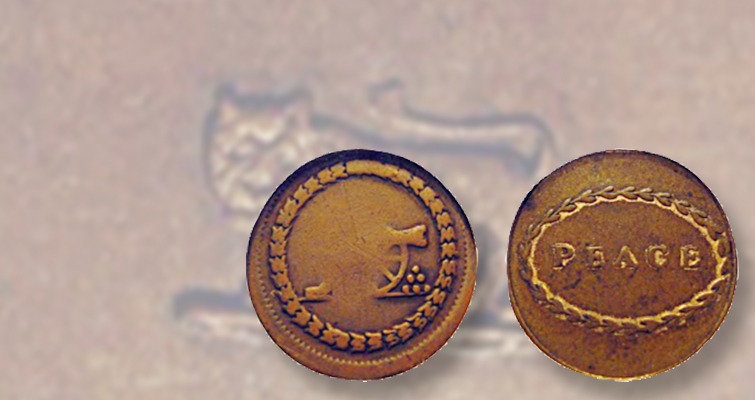 The collection, which was collected over a 25 year span, contains tokens dating back to the 1850s.

The following is a release from Civilwartokens.com

We are pleased to announce the acquisition of the Mark Glazer collection of Patriotic Civil War tokens. Mark sold the bulk of his collection a number of years ago to Bret Palser and Eagle Eye Coin. He retained The Best of The Best and was even able to add a few pieces more recently with the dispersal of the Steve Tanenbaum collection.

This collection formed over a period of 25 years contains many of the great rarities of the patriotic Civil War token series including pieces from the collections of George Fuld, Henry South, Cindy Wibker, Jon Harris, Joe Kuehnert, Dale Cade,  Andrew Zabriski, John Ford and Fred Reed just to mention a few. The list of this collection reads like a Who’s Who of Patriotic Civil War tokens. Many have never before been publicly offered for sale and it is not unusual for decades to pass between private sales. The highlights are too numerous to list, but we will mention a few. The Fuld 21/170a, which we consider the king of the patriotic CWT series, has been in this collection for more than twenty years. Its French Liberty Cap/Cannon dies are found only on this token and a white metal specimen which last appeared at auction over four decades ago and has never been seen or heard of since. There is the 57/185do from the Larkin Wilson collection which features a rare reverse bull die dramatically struck over an 1859 Indian Head cent. Also noteworthy are the virtually unobtainable 71/182a and 71/183mp the first with a reverse die depicting a tiger the second with a reverse die depicting a buffalo.  We should also mention a remarkable set of Abraham Lincoln MILLIONS FOR FREEDOM / NOT ONE CENT FOR SLAVERY tokens (AL 1860-59f and 60f) struck in SILVER. Last but not least are the classic 478/480a HOPE and the 502/503a PEACE tokens.

One of the more unusual types found in this collection are single die doubleheaders.  These tokens were struck using a single die one side at a time. This resulted in the side struck first being slightly wavy. They likely were die set up or trial pieces.  This collection contains 8 of the dozen or so known. All were struck in copper but for a white metal token (100A/100A) in the ANS collection. All but one is unique, the exception being the 425/425a of which two examples are known.

The cost of equivalent rarities in standard US coins series are beyond the reach of nearly all collectors. Not so for the tokens in this collection. Both the planned publication of a brand new edition of the Fuld patriotic book and the sale of this collection should spark new interest and enthusiasm for this series, this is likely an opportune time to add some of these tokens to your own collection. Want lists are solicited, remembering that most of the less expensive pieces were sold earlier.