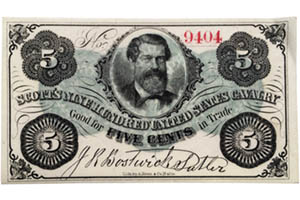 This 5-cent “good for” sutler token was issued during the Civil War by J.R. Bostwick who was the sutler, or private supplier, of non-military items to soldiers in the 11th New York Cavalry known as “Scott’s 900” after its namesake Thomas A. Scott, assistant secretary of war.

Civil War battlefields were not known for supplying all the comforts of home. But civilian merchants, known as sutlers, followed many Civil War regiments and offered nonmilitary-issued goods and food to soldiers.

A paper sutler token issued in 1861 by one such sutler will be offered at auction March 29 to 30 by Holabird Western Americana Collections in Reno, Nev.

Soldiers while on the battlefield often need provisions beyond their regulation issued military gear. The solution during the Civil War was for civilian suppliers to contract with the Union Army to sell those nonmilitary items to regiments while far away from their homes and towns.

In 1861 James B. Swain of New York was given authority to raise a volunteer regiment and he named it after his friend Thomas A. Scott, assistant secretary of war. The 11th New York Cavalry Regiment, known as Scott’s 900, eventually contracted with J.R. Bostwick to serve as its “sutler” or supplier of nonmilitary items.

This 5-cent paper scrip note indicates it was good for FIVE CENTS IN TRADE and signed by Bostwick along with the word SUTLER. Bostwick issued paper scrip in 5-, 10-, 25- and 50-cent denominations, often to extend credit to a soldier or as a way to give change when soldiers made purchases. A note at the bottom of the scrip note indicates it was printed by A. Hoen & Co. in Baltimore. The portrait may well have been a likeness of Bostwick.

These small pieces of paper offer collectors a hands-on glimpse into history. Just imagine who might have used this item and what they purchased with it?