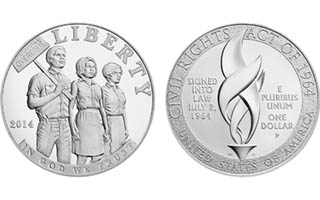 The reverse of the Proof 2014-P Civil Rights of 1964 commemorative silver dollar exhibits a combination of five different finishes. It is the first time this combination of finishes was used on a single coin.

The Proof version of the 2014-P Civil Rights of 1964 commemorative silver dollar is like no other that the U.S. Mint has ever produced.

Details on the coin’s reverse exhibit a combination of multiple finishes executed through the use of different Proof polishing and laser texturing techniques.

At least five prototypes with different finishes on the same details were produced during testing at the Philadelphia Mint before a specific combination was selected for final production.

Read more in the April Monthly Edition of Coin World.