City on the Boardwalk 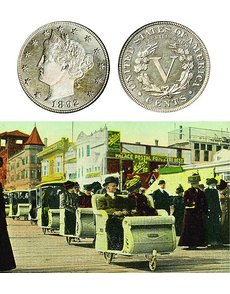 In 1892, the 5-cent coin was king in the New Jersey shore town of Atlantic City, whose bustling Boardwalk is illustrated in this image.

Time was when the 5-cent coin was king. Whether we have a useful copper-nickel 5-cent coin today can be debated. I do know that the nickname “nickel” can be questioned, as perhaps they should be called a “copper,” for the alloy is 75 percent copper and just 25 percent nickel.

Now, to step back in time. The Knoxville (Tenn.) Journal, Sept. 21, 1892, included an article, “The Nickel is King,” with the subtitle, “Atlantic City is the Great Five Cent Resort. Uncounted thousands go there for rest, bathing, and refreshment, and they find the nickel is the coin most in demand — the people’s paradise.” Excerpts:

“This is the greatest summer resort in the United States. No other attracts one-half so many visitors. It is a city of pleasure whose magnitude astonishes all beholders. Atlantic City stretches three miles or more up and down the shore, and extends back from the sea about half a mile. Within this area are 700 hotels and cottages licensed to entertain guests. ...

“[Here is] the strangest aggregation of amusements and temptations the eye of mortal ever beheld. Merry-go-rounds; the Boardwalk; roller coasters which fly so fast that the air is often rent with the screams of frightened but not endangered passengers; an ‘observation railway,’ whose cars go at such speed you can’t see much, and then go through a tunnel in which you can see nothing; a figure 8 railroad, on which you describe two circles at different heights over and over to the tune of ‘Maggie Murphy’s Home’ from a steam music machine; a huge wheel which lifts humanity-laden baskets above the housetops, a merry-go-round composed of bicycles bolted tandem and propelled by steam; another merry-go-round which imitates the motion of a ship at sea, and thus produces in most passengers a delightful and inexpensive seasickness; scores of other queer things to ride upon; piers to walk out into the ocean upon; photographic galleries, theaters, horse shows, illusions, candy stores and taffy factories galore; ice cream, soda, lemonade, popcorn, peanuts, cigars, curiosities, toys, relics — of these a revel. Atlantic City is the city of the hoi polloi; it is also the city of the nickel.

“Given three or four children, an indulgent father and a five dollar bill. Result, more fun than any sane man had ever thought could be had in two hours, and not a nickel left. Almost everything is five cents. Tis so cheap you take everything in sight. By strict attention to business, nimble chasing of the willing nickel, Atlantic City is rapidly growing rich. Many comfortable fortunes are made here every year.”