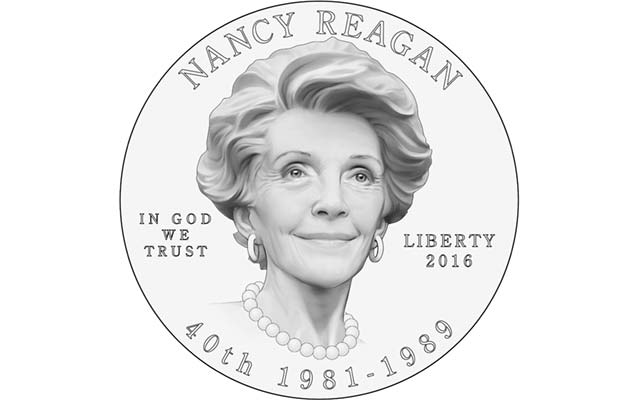 Meeting by teleconference Aug. 10, the Citizens Coinage Advisory Committee, in a split vote, recommended the proposed reverse design favored by former first lady Nancy Reagan for the 2016 First Spouse gold $10 coin that will honor her.

The winning design, depicting Reagan and two young children, was one of four with a similar theme highlighting her “Just Say No” anti-drug program.

Three CCAC members who voted against the design recommendation were in opposition to Reagan’s visage appearing on both sides of the coin.

The coin will be the first U.S. coin to depict a living former first lady.

Of the five designs reviewed Aug. 10, the recommended reverse design was one of four new designs the U.S. Mint’s engraving staff submitted for consideration, after the CCAC rejected all previously proposed reverses at its June 17 meeting.

Similarly, the Commission of Fine Arts June 18 withheld judgment on any proposed reverse designs until the Mint submitted a group of new designs, as the CCAC recommended.

A fifth design reviewed Aug. 10 was a modified version of one considered in June.

In their respective June meetings, the CCAC and CFA both recommended an obverse portrait favored by Mrs. Reagan.

No additional actions were required on that side of the coin.

The CCAC-recommended reverse, which Reagan favors, depicts her behind and between a boy and a girl, both of whom are wearing Just Say No T-shirts in reference to Reagan’s anti-drug campaign of the 1980s.

The CCAC recommended that the positioning and proportions of the first lady’s left and right hands be modified to appear more anatomically correct.

It was suggested that, as submitted, the positioning of Reagan’s hands gives the odd impression that her arms are unnaturally long.

A second proposed reverse depicts Reagan, left, smiling in approval at the boy, who is looking up at her.

The remaining two new reverse designs proposed depict Reagan at a podium with her arm on the boy’s shoulder, presumably after the delivery of an anti-drug message.

The fifth design considered Aug. 10 by the CCAC intends to depict Mrs. Reagan’s left hand with a thumbs-up gesture and inscription in the field saying LIFE, and the left hand of a child positioned thumbs down over the inscription DRUGS.

The design is meant to represent Reagan’s efforts to empower children with the ability to say no to drugs.

Melissa Giller, chief marketing officer for the Ronald Reagan Presidential Foundation, said June 17 that Mrs. Reagan might throw her support behind the thumbs-up, thumbs-down design if modified as suggested by the CCAC.

Reagan did not like the design as originally presented, Giller said, as that design did not differentiate whose hands were being shown.

Giller said Aug. 10 that, while Reagan liked the modified hands design, she preferred the one with the boy and girl in Just Say No T-shirts.

Stevens-Sollman was the first to raise the issue of two different portraits of the same person on the same coin. April Stafford, the Mint’s chief of design development, reminded the group that several earlier First Spouse coins depict the former first ladies on both obverse and reverse.

Stevens-Sollman said she believes the hands design with its positive message is “very bold.”

While she did not favor the design the CCAC ultimately recommended, she acknowledged that the addition of a child of color was something the panel asked for in June.

The girl in the design appears to be of African American descent.

Bugeja, whose appointment to the CCAC was based on his qualifications in numismatics, said he had a real problem with Mrs. Reagan appearing on both obverse and reverse. “It’s a coin, not a medal,” Bugeja said.

Despite that reservation, he said, “I like designs one through four [all showing the Just Say No portraits] better than I like five [the hands].” He added, however, “We don’t have reverses from a numismatic standpoint.”

Bugeja said the design selection was not Mrs. Reagan’s to make. Bugeja said an honest attempt at numismatic designs should be made, something he believes the artists “failed to deliver.”

Bugeja suggested to Lannin that the artists be directed to address the symbolic nature of coin designs so the panel has more than one or just a few designs to consider.

Marks said he believes the hands design reflects a universally symbolic message that would leave a powerful legacy for Mrs. Reagan and her anti-drug initiatives.

Hoge countered that, years from now, someone encountering the thumbs-up, thumbs-down design might interpret the LIFE and DRUGS inscription as the use of drugs to prolong life. Giller said the design sent a similar “confusing” message to Reagan as well.

Moran said because the Reagan gold coin is precedent-setting in depicting a living former first lady, “not picking what she wants is unacceptable.”

Scarinci said recommending Mrs. Reagan’s preference was a “no brainer” that will cement her legacy in numismatic history.

Lannin said she was “sympathetic” to Mrs. Reagan’s reverse design preference, voting in favor of her choice with the stipulation of the modifications involving the positioning and proportions of Reagan’s hands on the children’s shoulders.

The CFA is expected to consider the proposed Reagan reverse designs at its September meeting, the third Thursday of the month.

The CCAC’s next expected meeting is Oct. 8, with the possible addition of Oct. 7, depending on the extent of its agenda.

More about the coin

The coin is scheduled to be released next year when the Mint also honors Ronald Reagan with a manganese brass-clad dollar coin marking his eight years in the White House as the 40th president.

When Mrs. Reagan’s coin is issued, she is positioned to become the fifth person to have been honored on a U.S. coin while living.

All of the previous four appearances have occurred on commemorative coin issues.

Alabama governor Thomas E. Kilby was the first to record the honor being, depicted on the 1921 Alabama Centennial half dollar.

And finally, Special Olympics leader Eunice Shriver appeared on a 1995 silver dollar honoring the games for the handicapped.

Born in July of 1921, Nancy Reagan will be nearing age 95 in 2016 when the coin is released, and she will be the only first lady depicted on a First Spouse gold coin while still living. Ronald Reagan will be the last president celebrated with a Presidential dollar.

The law prohibits living past presidents and the serving president from appearing on one of the series’ coins.  Even if one of the existing past presidents were to die before the program ends in 2016, he would still be prohibited from being depicted on one of the coins in this program because the authorizing law requires a president to have been deceased at least two years before a coin depicting him could be included.