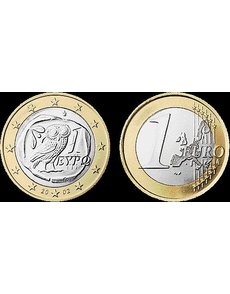 The author marveled at a €1 Greek coin as he stood at the Acropolis during a recent trip. The coin’s designs evoked feelings of antiquity. The obverse shows the owl of Athens, the signature feature of fifth century B.C. tetradrachms.

National borders have always been porous for coins. Coins roughly the same size circulate as equals almost anywhere, regardless of the exchange rate.

A Canadian 10-cent coin easily passes in upstate New York. An old German 1-mark coin will buy a quarter dollar’s worth of time in many American parking meters.

When you place a foreign coin in circulation, you always feel a little uneasy. It’s a somewhat clandestine practice, but the convenience of getting rid of the foreign coin overrules the letter of the currency laws, every time.

In Europe, though, cross-border circulation isn’t some shady practice, it’s how business is conducted. Since 2002, when the euro became a circulating medium of exchange in what is now the 17-member eurozone, coins struck to one physical standard and valued at one value circulate from Ireland to Greece.

It makes pocket change all the more fun. In Europe, too, pocket change has real purchasing power. The ringed-bimetallic €2 coin is worth roughly $2.50 in U.S. funds.

During a recent trip to Greece, I spent as much time looking at my change as I did at looking at the temples and monuments. Despite the ease of monetary movement, local coins tend to circulate locally. It wasn’t exactly a surprise to see a non-Greek coin in Athens, but most of the coins had Greek designs.

The Greek €1 coin is a delight. It echoes the nation’s coinage of antiquity. The famous owl of Athens, the signature feature of fifth century B.C. silver tetradrachms, peers out from the obverse. An olive sprig, sacred to Athena, and a crescent moon, recalling Athens’ famous 490 B.C. victory over the Persians at Marathon, appear to the left of the owl, just as they did 2,500 years ago.

The only difference is to the right of the owl. Where ancient coins had the first letters of the word Athens, new coins have the denomination.

I pulled one out of my pocket while I stood at the top of the Acropolis and marveled at it for a moment. I left my real tetradrachm in the bank safety deposit box at home, but holding the Greek €1 coin was almost as good — maybe even better since it represents the adaptation of ancient ways to 21st century demands.

Now, the next trick will be to see if I can pass them here in change.