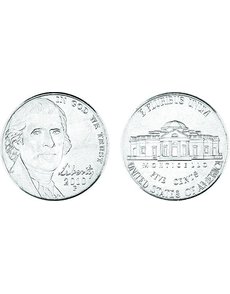 The U.S. Mint’s latest audited cost to produce each Jefferson 5-cent coin for circulation is 9.24 cents.

The U.S. Mint’s costs to produce five of its six circulating coin denominations continue to rise, with each 5-cent coin costing nearly double its face value to make.

The Mint’s latest audited figure as of the Sept. 30 end of Fiscal Year 2010 shows it costs 9.24 cents to produce each Jefferson 5-cent coin for circulation That cost is 53.2 percent higher than FY2009, when the cost was 6.03 cents.

Production costs for Kennedy half dollars are not included in the circulating coinage costs because the coins are sold in bags and rolls strictly as a numismatic product, although the half dollars are struck in a circulation-quality finish.

The rising price of copper has played a significant role in increased production costs. Every United States coin struck for circulation employs copper in its composition.

Copper bears the highest cost among the various metals used in circulating coins, having a per pound price of $4.217 Dec. 21 on the New York Commodities Exchange, more than double what it was in 2004.

Lincoln cents are composed of pure zinc coated with a plating of pure copper. Finished, ready-to-strike planchets are supplied to the U.S. Mint by Jarden in Greenville, Tenn.

For the remaining denominations, coinage strip from which the U.S. Mint punches raw blanks is supplied by two vendors — PMX Industries in Cedar Rapids, Iowa, and Olin Brass, from East Alton, Ill.

The Jefferson 5-cent coin, 5 grams in weight, is made of a homogenous alloy of 75 percent copper and 25 percent nickel.

The Roosevelt dime, at 2.27 grams, and America the Beautiful quarter dollars, at 5.67 grams, are clad coinage, representing outer homogenous layers of 75 percent copper and 25 percent nickel bonded to a core of pure copper.

The Native American and Presidential dollar coins, weighing 8.1 grams, are manganese-brass clad in composition. Their composition is fabricated from outer layers of 77 percent copper, 12 percent zinc, 7 percent manganese and 4 percent nickel, bonded to a core of pure copper.

The U.S. Mint was given the authority to research and recommend alloy alternatives when President Obama signed the Modernization, Oversight, and Continuity Act of 2010 into law Dec. 14.

The Mint cannot implement alloy changes to most circulating coins, however, without congressional approval. ¦