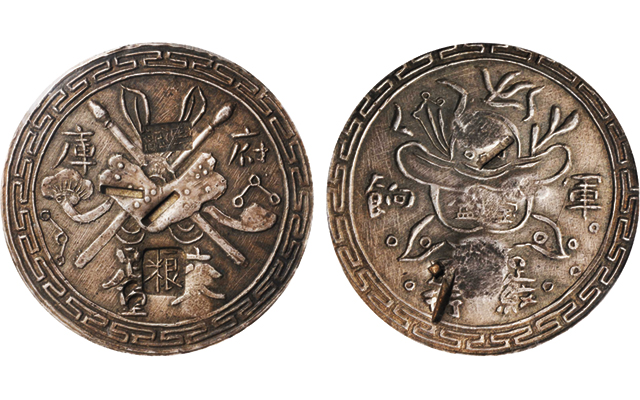 A rare Bi Pao military ration silver dollar issued during an uprising in Taiwan in 1853 realized $119,500 U.S., including the 19.5 percent buyer’s fee, during Stack’s Bowers and Ponterio’s Aug. 18 and 19 auction in Hong Kong.

When an uprising occured in the Fung-Shan district of Taiwan in 1853, military ration dollars were created to pay soldiers.

The coin (with a weight or value of 6 mace and 8 candareens) is undated.

The Taiwan Treasury supplied the silver to produce these coins, which were struck in Taiwan during the uprising, which lasted several months.

Once the uprising ended, minting of this coinage ceased. Although mintages for this type are unknown, it is clear they must have been very small.

Two main designs are known for these ration dollars.

One side of both types shows a vase and branches, according to Eduard Kann in his Illustrated Catalog of Chinese Coins (Gold, Silver, Nickel & Aluminum).

The other side shows either crossed lotus flowers or (like the one in this auction) crossed Sumi calligraphy brushes. This latter type is “much rarer” than the lotus flower type, according to Stack's Bowers and Ponterio catalogers.

Experts disagree as to which design is the obverse and which is the reverse. Kann designates the vase side as obverse, while the auction house (and another major reference) indicate the brushes or lotus flowers side is the obverse.

These coins all feature a few Chinese symbols that were added immediately after production, Kann wrote. But they are also often found heavily marked or “chopped” from a time when circulating silver coinage was tested throughout China by many merchants.

This example has a few scattered chops on a toned surface and is designated “Genuine” with Chop marks and About Uncirculated Details by Professional Coin Grading Service in a PCGS Secure Holder.

The coin was once part of the Irving Goodman Collection. However, it was withdrawn from the May 28 and 29, 1995, auction of part of Goodman’s collection, conducted by Superior Stamp & Coin (where it was estimated at $2,500 to $3,000), and its whereabouts since then has not been publicly known.