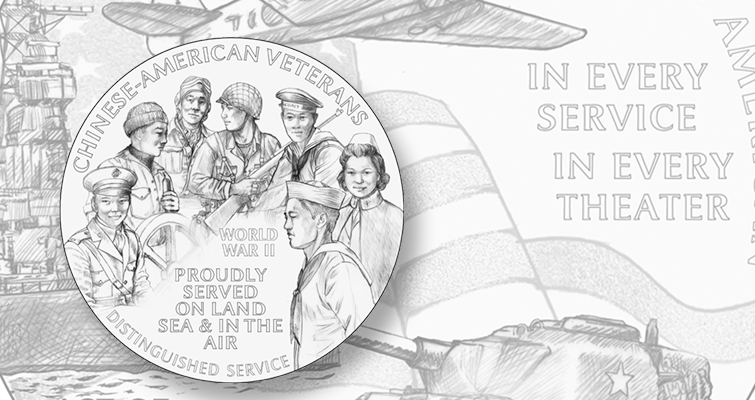 Chinese-American veterans of World War II are being collectively recognized with a congressional gold medal. 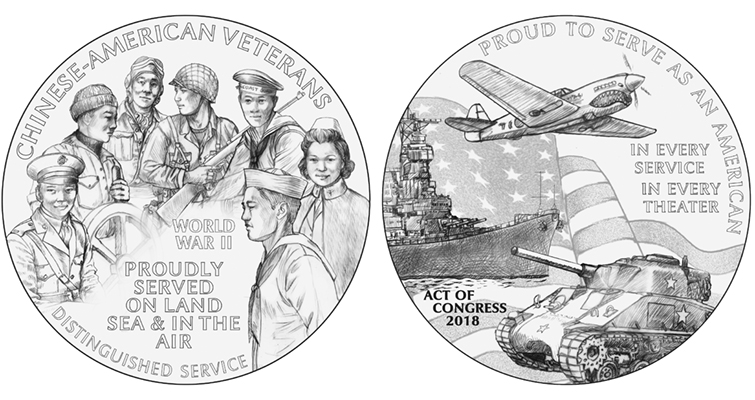 CCAC-recommended designs for the Chinese-American Veterans of World War II congressional gold medal recognize their military service in all branches of the armed forces and in all theaters of operation.

Chinese-American veterans of World War II are being recognized with a congressional gold medal, and we have a first glimpse at what it might look like when struck.

According to the authorizing legislation, Public Law 115-337, “Chinese Americans served the United States in every conflict since the Civil War, and distinguished themselves in World War II, serving in every theater of war and every branch of service, earning citations for their heroism and honorable service, including the Medal of Honor.”

The CCAC recommends a proposed obverse that depicts several Chinese-American servicemen and a nurse, representing all U.S. service branches in World War II and highlighting that they fought in every theater with honor.

The reverse the CCAC chose to recommend features an Iowa class battleship, an M4 Sherman tank, and a P-40 Warhawk from the Flying Tigers, showcased in front of a World War II-era American flag.

After formal presentation of the finished gold medal by the congressional leadership, the medal is to be delivered to the Smithsonian Institution for public display and research.

The U.S. Mint is to strike and offer for public sale 1.5-inch and 3-inch bronze duplicates of the gold medal.