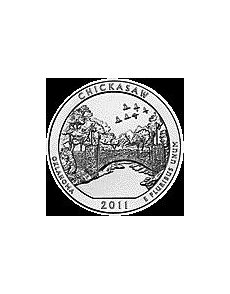 The Lincoln Bridge, built of limestone and dedicated in 1909 to celebrate the centennial of Abraham Lincoln’s birth, graces the reverse of the 2011 Chickasaw National Recreation Area quarter dollar. Image courtesy of United States Mint.

Following the Nov. 16 ceremony, attendees were able to exchange cash for $10 rolls of the circulation-quality 2011-D Chickasaw quarter dollars struck at the Denver Mint.

According to U.S. Mint spokesman Michael White, approximately 800 people were in attendance for the ceremonies and coin exchange.

White said Landmark Bank, which was in charge of the roll exchange, received cash for $24,000 in quarter dollars (2,400 $10 face value rolls containing 40 coins each).

Those attending the ceremony who were 18 years of age and under each received a 2011-D Chickasaw quarter dollar free.

The reverse of the quarter dollar depicts the Lincoln Bridge, built of limestone and dedicated in 1909 to celebrate the centennial of Abraham Lincoln’s birth. The bridge is the first constructed improvement in the national recreation area and a favorite scenic spot.

The 2011 Chickasaw National Recreation Area quarter dollar was officially released into circulation through the Federal Reserve on Nov. 14, the same day the U.S. Mint offered two-roll sets of the new coins as numismatic products at premiums above face value.

The night before the ceremony, the U.S. Mint hosted a coin forum at the Travertine Nature Center Auditorium where local residents gathered to discuss U.S. coinage and to learn about United States Mint initiatives and programs. ¦