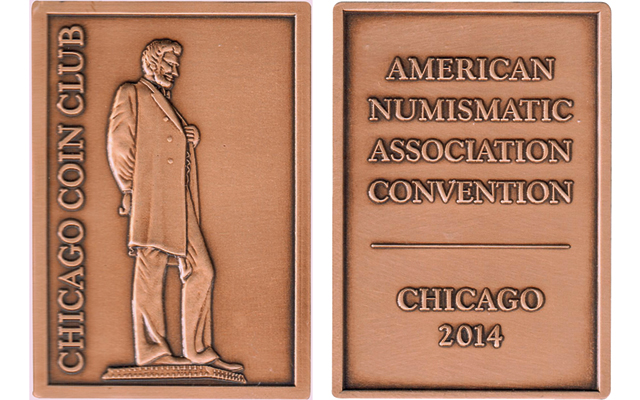 The Chicago Coin Club has issued a third medal in its series marking the staging of the American Numismatic Association World’s Fair of Money in suburban Chicago. The bronze 2014 medal, shown, joins issues from 2011 and 2013. Another is planned for 2015.

The third medal in a series marking the club's hosting of the American Numismatic Association World’s Fair of Money is now available from the Chicago Coin Club.

The obverse of each medal features the “Standing Lincoln” statue by Augustus Saint-Gaudens that is located in Chicago’s Lincoln Park at North Dearborn Parkway.

Left of the staue's depiction, the club name appears vertically. On the other side of the medals, inscriptions read: AMERICAN NUMISMATIC ASSOCIATION CONVENTION and CHICAGO, followed by the appropriate year date.

Each medal is offered for $20, and limited numbers of 2011 and 2013 medals remain available. The proceeds go toward covering the cost of producing engraved medals suspended from a neck ribbons for every speaker at ANA’s “Money Talks” series of education presentations.

Collectors should add $3 per medal for mail orders.

Plans for a fourth medal, for the 2015 ANA World’s Fair of Money, are in the works.