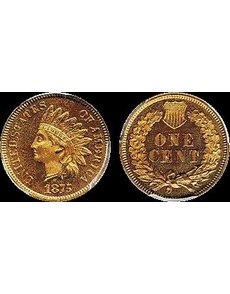 This Proof 1875 Indian Head cent, graded Proof 65 red and brown by Professional Coin Grading Service, was cherrypicked and is nicer than many Proof 65 red coins viewed by Bowers. Cherrypicking can pay real dividends, but it takes patience.

When I first discovered the world’s greatest hobby my focus was on Lincoln cents. The year was 1952 and I was barely a teenager.

A friend gifted me with two Whitman folders, showed me a rare 1909-S Lincoln, V.D.B. cent he had paid $10 for, and spent the best part of an hour telling me how to become a numismatist.

A teller at the Forty Fort (Pennsylvania) State Bank was nice to me and kept feeding me several dozen wrapped $2 rolls as I looked through them and brought them back. I eventually found all except the 1909-S Lincoln, V.D.B. cent, 1914-D cent and 1931-S cent.

I even found a few Indian Head cents. Ever since then I have had a fondness for 1-cent pieces and have bought, sold, and auctioned many in my professional career.

Recently I thought it might be enjoyable to build a set of Flying Eagle and Indian Head cents. I had Melissa Karstedt of Stack’s Bowers Galleries to help start picking Proof 65 red and brown examples of the cents, as a point at which the coins have a lot of value compared to red at the same level.

The secret is cherrypicking, as Melissa also did for me over a period of about two years for a set of Mint State 64 certified Peace silver dollars.

Among the cents, many MS-64 pieces, especially in the San Francisco Mint issues of the 1920s, lacked eye appeal. The 1928-S Lincoln cent was a real bear. It took a lot of doing, but finally she finished.

Melissa goes to a lot of coin shows so was a logical choice. I’ve known her since she was 4 years old, and she and my son, Andrew, went to the same pre-school classes accompanied by her mother, Chris (who today is well known professionally, as you probably know).

By cherrypicking it is possible to find Proof 65 brown coins that are choicer and have more eye appeal than Proof 65 red coins.

Not really, as you probably know if you are an old-timer.