Kennedy Half Dollars: Cheers to 50 Years 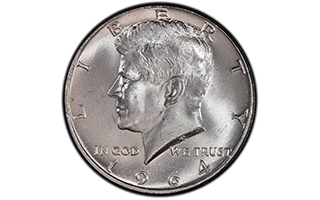 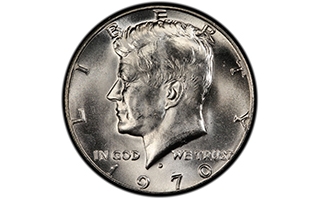 The face of John F. Kennedy has graced the obverse of the Half Dollar for half a century. As coin enthusiasts speculate on what the United States Mint has up its sleeve to celebrate, I wanted to look back at the exciting Kennedy Half Dollar series and what collectors should be doing now to ensure the completion of their sets!

Just over a month after Kennedy's death, Congress authorized the half dollar to change from Franklin to Kennedy. Immediately following his death, the US Mint went to work on the design. Gilroy Roberts had already designed Kennedy's portrait for his presidential medal and engraver Frank Gasparro designed the reverse which resembles the presidential seal. This allowed for the dies to be prepared quickly and production of the coins began in January 1964.

The 90% silver coins were released at the end of March 1964 and quickly disappeared from circulation. Collectors, hoarders and fans of the late President Kennedy grabbed up as many half dollars as they could. This made the US Mint increase production from 91 million to eventually minting 430 million, but still the Kennedy Half Dollar was rarely seen in circulation!

At the end of 1964, silver prices were on the rise and the silver supply at the US Treasury was low, so changes in the metal composition of all coins was enacted by Congress with the Coinage Act of 1965. This changed the Kennedy Half Dollar from 90% silver to 40% silver. Then in 1971, after much debate, silver was completely eliminated from the half dollar.

The next major milestone for the Kennedy Half Dollar was the 1976 United States Bicentennial. The Mint decided to hold a competition for a reverse redesign for the Washington Quarter, Kennedy Half Dollar, and Ike Dollar.  Seth G. Huntington's design of the Independence Hall was picked for the reverse design. All the half dollars minted in 1975 and 1976 were struck with the dates "1776-1976" on the obverse below Kennedy's portrait. The Bicentennial was wildly popular with the public- 521 million Half Dollars were minted.

In 2002 the mint stopped production of half dollars for general circulation and only struck half dollars for collecting purposes. Rolls, bags, and proof sets can be purchased from the Mint directly at a premium. Though circulation demand has dropped, collectors still love the Kennedy Half Dollar series and demand is on the rise with the 50th anniversary upon us.

Key Dates and Varieties to Collect:

1964 Proof Accented Hair: This is believed to be the first design struck of the Kennedy Half design. There is extra hair above Kennedy's ear as well as the 'I' in 'LIBERTY' missing lower left serif.

1964-D Double Die Obverse: There is doubling on the lettering on the obverse that is easiest to see at "WE TRUST", but it is visible on all the letters and the numbers of the date.

1970-D: Denver was the only Mint that made Kennedy Half Dollars in 1970 and the coin was only available in mint sets. As a result, it was one of the lowest regular strike years of production.

1974-D Double Die Obverse: Just like the 1964-D, there is a doubling on the lettering on the obverse that is easiest to see at "WE TRUST", but it is visible on all the letters and the numbers of the date.

1979-S Type II: The Mint Mark is a clear 'S' compared the the closed, filled 'S'. It is believed the die punch was becoming too unclear so during production they replaced the punch and thus created a clean, clear 'S'

1981-S Type II: It is believed in 1981 they changed the mint mark punch so coins that were produced later in the year had a completely different mint mark design.

1982-P No 'FG' Initials: Frank Gasparro initials are supposed to be placed in the field between the right wing and right leg. These initials were accidentally polished off one or more dies in an effort rid the dies of clash marks.

1998-S Special Mint Set Kennedy: This special matte finish was made as collectors coin and sold with the Robert F. Kennedy Commemorative Dollar. There were only about 62,000 to 64,000 (This number varies based on the source) minted! This a very rare Kennedy Half Dollar!

2012-S Silver Proof: The year 2012 was one of the lowest mintages of the Silver Proof Coins in the modern era and made the 2012 Silver Kennedy a hot coin.

How will the mint honor the 50th Anniversary?

Now is the time to start or update your collection today! Check out L&C Coins at www.LCCOINS.com where you can buy a complete Kennedy Set that is Choice Brilliant Uncirculated and Proof. It includes coins from 1964-PD to 2012-PDS, with clad and silver coins, three SMS coins, and the 1979-S Type II all housed in a beautiful dansco album. Or get a complete modern Kennedy Proof Set from 1973-S to 2013-S in clad and silver, with Types I & II in Proof 69 Deep Cameo by PCGS. Act now before the rush of collectors catch Kennedy Fever!