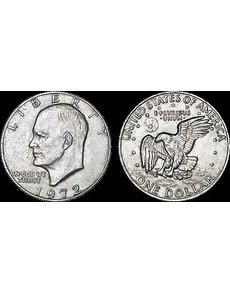 Clad coins when first released, were not popular with collectors, and today many minted from 1965 to the early 1970s are somewhat scarce in relation to later issues. Today they are more appreciated.

Recently, I commented that coins are in transition. What will happen if our lovable Lincoln cent goes the way of the passenger pigeon and dodo? I suggested that numismatists would soldier on — as enthusiastic as ever, collecting old things and contemplating the new.

In 1965, silver was removed from the dime and quarter dollar and reduced in the half dollar. Predictions were rife that this would spell the end of coin collecting as we knew it. Nobody but nobody liked the idea of copper-nickel and silver-copper “clad” coins, and they were widely ignored. Clad Eisenhower dollars introduced in 1971 were a nonevent.

Some years later Ken Bressett, editor of A Guide Book of United States Coins, commented that many once-silver denominations minted in copper-nickel clad metal in the late 1960s and early 1970s were indeed scarce in Mint State as few people saved them. Today, of course, clad coins of several different compositions are the name of the game and they are very popular. Just think of the State quarter dollars.

In The Manuscript Society News, Scott Peterson, collector of autographs, lamented that in a recent month he received only four handwritten notes, all from the same friend. Nearly everything has gone electronic. The editor said: “Peterson’s post raises some critical questions for collectors. Will the value of handwritten documents rise as their scarcity increases? Will computer printouts with electronic signatures find their way to the auction block? Will the original Word file of an important document ever be collectible? Tell us what you think — and keep those cards and letters coming!”

Now, there’s a problem, at least in comparison to numismatics. While we all keep adding now-appreciated clad coins to our collections, it is hard to disagree with Peterson about the collectibility of emails. I would guess that the era of hand-written or even typed letters is kaput. An autograph collector interested in the letters of Harry S. Truman can find a lot with great content — the atomic era, threats from foreign countries, and more. I daresay that President Barack Obama has written and mailed few traditional letters on paper addressing the major issues of his era.