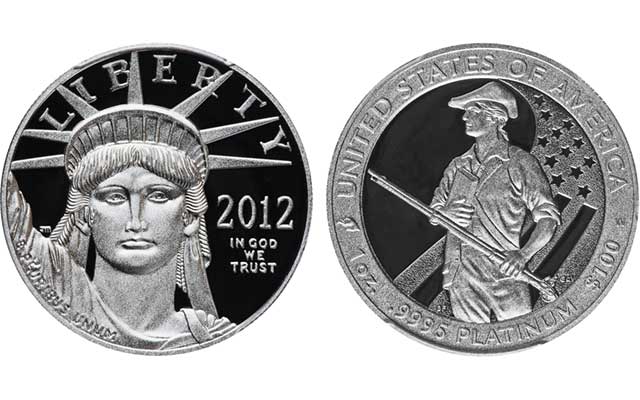 The Proof 2012-W American Eagle platinum 1-ounce $100 coin commemorates the tenet of American democracy, “To Provide for the Common Defense.”

Collectors of Proof American Eagle platinum coins are a small but zealous group.

The U.S. Mint was late to issue platinum coins, not starting until 1997. American Eagle platinum bullion coins were continuously offered from 1997 until 2008, then halted.

Proof American Eagle platinum coins, however, are treated differently than all other U.S. bullion coins.

The 1997 Proof issue used the standard bullion design. Since then, every year, the reverse design has been changed.

Coins minted between 1998 and 2002 display the “Vistas of Liberty” designs, which showcase America’s diverse landscapes.

Sales declined from 2003 through 2005 when coins with new designs but no pre-set theme were released.

A new three-year series began in 2006, showing allegorical representations of the three branches of government — Executive, Legislative, and Judicial.

In 2009, as platinum bullion coin sales were suspended, a most ambitious series of Proof platinum coins for collectors was launched: “The Preamble Series,” a six-year series illustrating core concepts of American democracy. Themes were inspired by narratives prepared by the chief justice of the United States at the request of the Mint.

Despite the interruption of bullion issues, the Proof American Eagle 1-ounce platinum $100 coin has been issued every year. This continuity adds to the collector appeal of the series, as do the well-executed annually changing designs.

Another big reason for collector enthusiasm is that the coins hold their value. Sold by the Mint each year at a premium of $350 to $400 above platinum spot price, they maintain this price in the secondary market.

The main reason these coins hold their premium is that mintages of Proof American Eagle platinum 1-ounce coins are low. Most are below 10,000. The 2013 and 2014 issues are below 6,000, and can still be purchased at or near their original issue price.