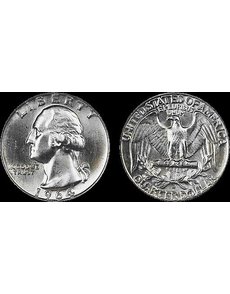 1964-D Washington quarter dollars were the last of the silver quarter dollars produced before the U.S. Mint switched to copper-nickel clad planchets in 1965. Silver kept rising in value, reaching $1.29 an ounce by the end of 1963.

Coin collecting changed forever 50 years ago when silver topped $1.29 an ounce, the point at which a silver dollar was worth more as metal than as money.

Since the end of World War II, the federal government had propped up the price of silver, buying it from mines at 90.5 cents an ounce and selling it at 91 cents. However, increased industrial demand coupled with market speculation caused the price of silver to rise above the government rate in the late 1950s. The government stopped selling silver bullion in 1961. At that time, silver certificates could be redeemed for silver at the rate of $1.29 an ounce.

Silver half dollars, quarter dollars and dimes contained 0.72338 ounce of silver for each dollar of face value. The tipping point for these smaller coins was $1.38 an ounce. Above that value, the coins were worth more as bullion than as coins.

In November 1961 silver stood within a fraction of a cent of $1. In January 1962, it crossed the $1.25 mark. Treasury officials told the Associated Press in January they were not alarmed. They doubted there would be a rush to redeem more than $1 billion in paper money that was backed by silver. And, they noted, no such rush occurred in 1919 when the metal spiked at $1.3825 an ounce.

But on June 5, 1963, President Kennedy signed a law authorizing the printing of $1 Federal Reserve notes to replace silver certificates. The move was expected to free the certificates’ backing, an estimated $1.3 billion in silver, for coinage.

In November 1963, Dr. Vladimir Clain-Stefanelli, curator of numismatics at the Smithsonian Institution, told syndicated financial columnist Sylvia Porter, “We have reached the point where silver is too precious to be used as a coinage material.”

The Mint produced massive amounts of silver coins in 1964, but switched to clad coins in 1965. Dimes and quarter dollars were struck on copper-nickel clad planchets. Half dollars were 80 percent silver through 1970, when even that was too expensive to produce.

Curiously, as bullion prices were rising in 1963, the Kennedy administration asked Congress on Nov. 21 to authorize the coining of silver dollars for use by gambling casinos. Those 1964-D Peace dollars were struck in May 1965, at the Denver Mint, but all were melted in the face of rising prices.