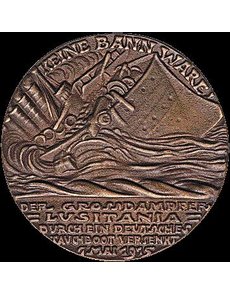 A chance purchase by the author led to an ongoing fascination with the Lusitania satirical medal engraved by German medalist Karl Goetz.

Near the end of November 2002, I was in a local coin shop and noticed an odd-looking medal with the image of a skeleton and a depiction of the sinking of the Lusitania on it, and the bid board listing for the piece was only $20. With but a day or so to go before the bid board closed, I wrote my bid number and the $20 reserve price down on the medal’s ticket.

A few days later I went to the shop and was happy to find that I had won the piece. I took it home, put it in a new plastic flip for storage and stuffed it in a box alongside numerous other impulse buys. It might have languished there and this article never been written, except for a short trip I took a couple of months later.

In early 2003 I traveled from my home in Upland, Calif., up to San Jose to attend the semi-annual convention of the California State Numismatic Association. As I browsed the bourse I glanced at a case that caught my eye, and what did I see? Not one, but two medals that looked similar to mine.

Intrigued, I asked the dealer if I could look over his two medals. He pulled them out of the case and handed them to me, explaining, “They have two different dates.” It was true. One showed the date as “5 MAI” and the other as “7 MAI.” Now here was a puzzlement. For the life of me I couldn’t remember what my medal back home showed, and here were two medals with differing dates, and both medals appeared to be in better condition than the medal I already owned.

The dealer wanted $55 for one and $65 for the other. I opted for the cheaper of the two. It turned out to be the one marked “7 MAI.” In fact, I bargained the gentleman down to $40 for the piece.

I was pretty happy with my lucky buy and resolved to compare it to my previous purchase when I returned home late the next day.

However, later that Saturday night, something bothered me. If you’re a collector, I’ll bet you’ve experienced the same thing, too. I wanted that third medal and knew I would know no peace until I had it.

Early the next morning I went straight to the dealer’s table. He wasn’t there. I patiently waited, and waited, and waited. Finally, after I waited for 20 or 30 minutes, the dealer sauntered up and asked what he could do for me. I explained that I had bought his medal’s mate the day before and now wanted to buy the other. He was nice about it and let me have it for $50.

I was so pleased. I rushed to a quiet spot in the bourse area and pulled out my previous day’s purchase so I could compare the two. I could barely wait to get home so that I could compare all three medals, one against the other. The drive home later that day seemed to take much longer than usual.

When I got home I pulled out my original medal and compared it against the two new ones. My bid board medal was much rougher and cruder in appearance. Gradually I noticed, feature by feature, many differences between the three medals. I later determined that the first medal I had purchased from the coin shop was a counterfeit. Happily though, the two I bought at the coin show were both genuine Karl Goetz medals worth much more than I paid for them, though I didn’t know it at the time.

As the old saying goes, the die was cast. I was bitten by a bug and had to learn all about the event depicted on my new treasures. I wanted to know who the people were, and all about the circumstances that led to the sinking, and all about dozens of other things relating to the medal and its maker. I spent several years compiling records, corresponding with various experts and other collectors, reading many dozens of books, and gradually building up an understanding of the piece and its place in history. Along the journey I became somewhat of an expert on the many varieties and their makers, created a Web site on the topic (www.LusitaniaMedal.com) and have had the pleasure to advise other collectors, museum curators, and Internet adventurers about the various fine points of these pieces.

Greg Burns, a collector from Upland, Calif., is author of Commemoration of Death: The medals of the Lusitania murders.