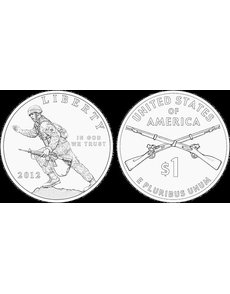 The Commission of Fine Arts recommends these designs for the 2012 commemorative silver dollar honoring the U.S. Army Infantry. 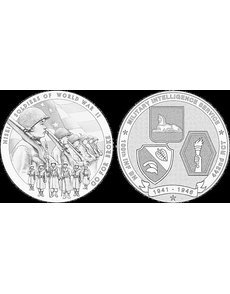 The Commission of Fine Arts recommends these designs for the congressional gold medal honoring Japanese Americans who fought in World War II.

The Commission of Fine Arts has endorsed veterans’ preferences for the design of a new congressional gold medal honoring Japanese Americans who fought in World War II and a separate silver dollar honoring the U.S. Army Infantry.

Meeting in Washington May 19, the panel endorsed designs for both, bowing to the wishes of the veterans groups that had lobbied Congress for approval of the medal and the dollar. Veterans appeared before the commission, strongly endorsing the designs they said their members want.

For a new gold medal to honor the thousands of Japanese Americans who fought with U.S. forces in World War II, the panel endorsed an obverse design showing a row of soldiers in front of a fluttering U.S. flag along with an Army color guard. For the reverse they recommended a design honoring the insignia of the three specific Army organizations being honored by the medal — the Military Intelligence Service, the 100th Infantry Battalion and the 442nd Regimental Combat Team.

Pamela Nelson, the commission vice chair and a Dallas artist, called the selected obverse for the medal “very strong.” She said it and the proposed reverse “work together very well.”

In response to a commission member’s question, Don Everhart, a Mint sculptor-engraver in attendance at the meeting, assured the commission that if they wanted more stars added to the fluttering flag on the obverse, that easily could be done.

The gold medal honors the Americans of Japanese ancestry, predominately Nisei or second-generation, who fought for the United States in World War II.

Some of these soldiers were ordered discharged from military service after the Dec. 7, 1941, Japanese attack on Pearl Harbor, but were later allowed join the military.

The Military Intelligence Service was composed of about 6,000 Japanese Americans who helped with highly classified intelligence work in the Pacific Theater, work that remained unknown until 1974 when documents about their service were made public. These individuals helped translate and monitor Japanese broadcasts and messages during the war.

The gold medal authorized by the 2010 act will be presented to the Smithsonian Institution. Three-inch bronze reproductions will be sold to the public by the U.S. Mint.

For the 2012 United States Army Infantry commemorative silver dollar, which will support the two-year-old National Infantry Museum and Soldier Center at Fort Benning, Ga., the commission backed a design based on an iconic statue of a soldier leading his men forward, for the obverse.

For the reverse the commission endorsed a design showing crossed muskets, the Infantry’s insignia. The panel also recommended to Treasury Secretary Timothy Geithner that the “$1” denomination below the muskets be written as “One Dollar,” a change the veterans urged.

Greg Camp, executive vice president of the National Infantry Foundation, said his organization strongly wants a design on the silver dollar that would show a soldier leading his unit into combat. A statue reflecting this theme, originally called The Infantryman and renamed Follow Me in 1964, stands at the Georgia fort, but Kaarina Budow, a U.S. Mint marketing official, told the commission that the Mint could not legally use that exact design on the coin.

As a result, Mint artists came up with nine variations of that design, using soldiers from World Wars I and II and modern times as well as a silhouetted solider leading his unit against a flag. Three additional designs were offered for review as well, one showing four infantrymen crawling under barbed wire, another depicting a modern soldier against a silhouetted squad with rifles at the ready and a third showing two soldiers firing their weapons in different directions.

In all, the panel reviewed 12 obverse designs for the coin and seven reverses.

Several of the reverses feature the Combat Infantry Badge, a military award given only to those who have served in the infantry in combat. One features a military boot hitting the ground, another symbol of the infantry.

Camp said that the soldiers represented by his group want the “follow me” figure.

He did not seem troubled when Nelson, who led the commission’s discussion, noted that the coin designs did not have the figure’s hand as high as the statue’s hand.

“Do you think that would connect to the soldiers?” she asked.

Camp said it would. “That’s the one most closely resembling the statue,” he said.

If the coin, due to be issued next year, is sold out it could mean up to $3.5 million to the Georgia-based foundation. It will benefit from the $10 surcharge to be placed on the 350,000 silver dollars authorized by Congress in the 2008 law.

The medal and coin designs were to be reviewed by the Citizens Coinage Advisory Committee on May 25.

Geithner will have the final say on the designs for both the medal and coin. ¦