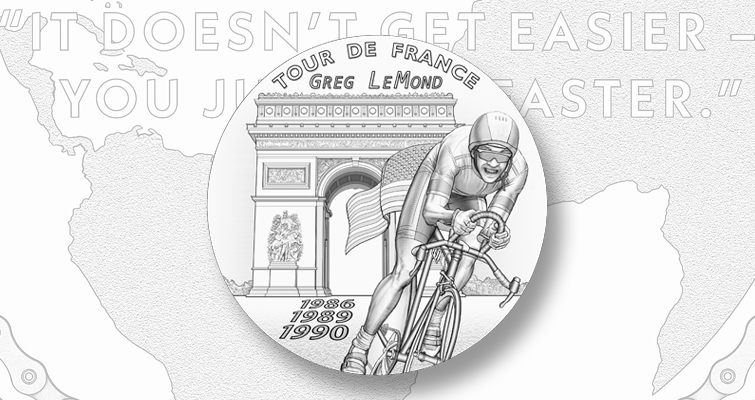 These proposed designs are recommended by the Commission of Fine Arts for the Greg LeMond congressional gold medal.

From six proposed obverse designs and six reverse designs submitted by the U.S. Mint for consideration from works rendered by either Artistic Infusion Program designers or medallic artists on the Mint’s engraving staff, the review panel opted to recommend the proposed designs favored by LeMond.

The favored and recommended obverse design depicts LeMond cycling past the Arc of Triomphe, during one of the three Tours de France in which he claimed victory.

The dates for the three races LeMond won — in 1986, 1989 and 1990 — appear in the lower left field of the medal design, to LeMond’s right. An American flag is visible directly behind LeMond.

The CFA’s reverse design recommendation illustrates a textured globe representing road asphalt with bicycle chain links and inscriptions around the outer border. The reverse is inscribed with a shortened version of a LeMond quote, IT DOESN’T GET EASIER - YOU JUST GET FASTER.

The authorizing act for LeMond’s gold medal, Public Law 116-208, recognizes LeMond for “his service to the nation as an athlete, activist, role model and community leader.”

LeMond first competed in the 23-day, more than 2,200-mile Tour de France in 1984, finishing third, and placed second in the competition the following year. 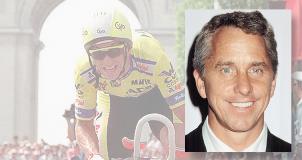 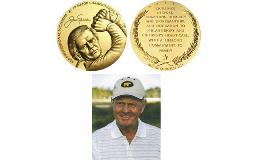 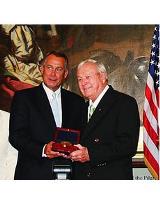