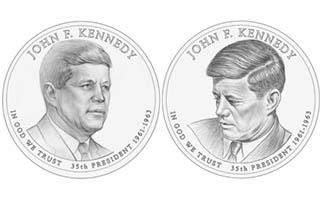 Members of the Commission of Fine Arts believe a more formal portrait of John F. Kennedy, above left, proposed for his 2015 Presidential dollar could be improved. The Citizens Coinage Advisory Committee previously endorsed a design, above right, capturing the president in a more pensive moment. 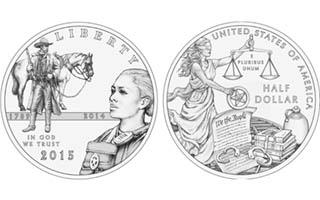 The above designs proposed for the 2015 U.S. Marshals Service copper-nickel clad half dollar received favor from the CFA. 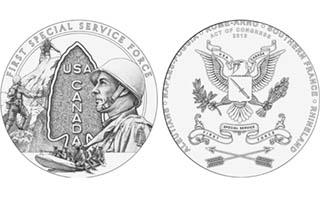 For a congressional medal honoring the First Special Service Force in World War II, the CFA endorsed an obverse design favored by the members of that force showing the unit mountain climbing skills. The favored reverse shows the unit’s insignia.

The Commission of Fine Arts is moving toward a process that should make its recommendations more like those of the Citizens Coinage Advisory Committee.

Meeting in Washington March 20, the CFA — the federal government’s oldest coin review panel — invoked the new process as it informally reviewed designs for 11 coins and one medal.

Only three members of the seven commission members were present for the session, making all of the recommendations subject to approval by the commission at its April 17 meeting.

A commission official said after the meeting that the full commission is unlikely to change any of the coin recommendations.

Most of the CFA’s recommendations for six Presidential dollar coins, three U.S. Marshals Service commemorative coins, two Native American dollar reverses and one congressional gold medal are similar to those the CCAC made earlier in the month.

This should give the panel more time to deal with proposed federal buildings and memorials in Washington, projects that constitute the majority of its workload.

Instead of reviewing all the coin designs that the U.S. Mint has been showing to the CCAC, the new process will restrict the CFA’s public reviews to designs that have been endorsed by the CCAC or stakeholder groups that have an interest in the coins or medals.

All the Mint designs were sent to the commission members prior to the meeting, and Mint officials said they were free to call any of them up for discussion.

The new process was developed with the Mint and CCAC representatives, Luebke said.

The speedier process appeared to work. It took about an hour for the commission to complete reviews of designs that the CCAC had spread over two days.

On the six Presidential dollars planned for release in 2015 and 2016, the three commission members agreed with the CCAC’s recommendations for the 2015 Harry S. Truman and Dwight D. Eisenhower dollar obverses, and 2016 Richard M. Nixon and Gerald R. Ford obverses.

In a departure with the CCAC, the CFA backed a Lyndon B. Johnson design for 2015 showing the 36th president looking upward over the CCAC’s preferred design showing Johnson looking straight ahead. The CFA recommended that Johnson’s image be reduced in size to avoid bumping into the type over his head.

The CCAC had recommended a somewhat downcast image of Kennedy for his coin. However, the CFA rejected a Mint suggestion that this design was appropriate was patterned after Kennedy’s White House portrait.

Commission member and sculptor Teresita Fernandez of New York argued that the Kennedy pose may be fine for a painting, but on a coin the public wants a straight image of the president.

In considering the Kennedy portraits for the dollar coin, the CFA did not take a formal vote, but selected an image that the CCAC had rejected. However, the CFA indicated Kennedy’s age depiction in that image could be improved.

The CFA also largely followed the CCAC’s recommendations for a series of three commemorative coins honoring the U.S. Marshals Service to be issued in 2015.

The three members endorsed the CCAC’s recommendations for the gold $5 coin and the silver dollar obverse and the half dollar copper-nickel clad obverse.

But the CFA urged tightening the word “Liberty” around the badge on the dollar obverse and shifting the horse’s position on the half dollar obverse.

The CFA urged removing the horizontal post on the reverse of the silver coin and opted for a design showing the same Western marshal as in the CCAC’s pick, but with a different type face than used on the CCAC selection.

On the half dollar reverse, the CFA backed a design showing a blinded Liberty as opposed to the CCAC’s choice. The CCAC had rejected the Liberty figure in favor of a design showing symbols of the work marshals have performed.

In both designs, the two panels recommended removing a pair of handcuffs that were placed over the Constitution.

For the 2015 Native American dollar, the CFA agreed with the CCAC’s recommended reverse featuring the Mohawk Ironworkers and for 2016 the Code Talkers design showing eagle feathers and Army helmets with the notations for World War I and World War II replacing the dates on the designs.

For a congressional medal honoring the First Special Service Force in World War II, the CFA endorsed an obverse design favored by the members of that force showing the unit’s mountain climbing skills.

The CCAC had favored a design showing a soldier in winter combat for the obverse.

For the medal’s reverse the CFA favored a design showing the unit emblem, which the CCAC also endorsed.

Treasury Secretary Jacob Lew or his designee will select the final designs for all the coins and medals after reviewing the findings from both the CFA and CCAC. Lew is not obligated to approve any of the designs recommended by either panel.