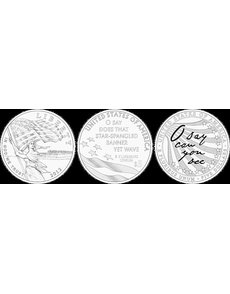 Commission of Fine Arts members recommend this obverse, left, and a combined version of these two reverses, middle and right, for the 2012 Star Spangled Banner Bicentennial gold $5 coin. 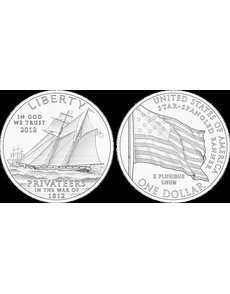 Commission members propose these designs for the obverse and reverse of the 2012 Star Spangled Banner Bicentennial silver dollar.

The issue before the Commission of Fine Arts, said New York landscape architect Diana Balmori, was to determine which coins designs for the bicentennial of the Star Spangled Banner would be “clearly understandable and iconic.”

The designs that the commission recommended July 21 for the gold and silver coins to be issued in 2012 may not have been Ms. Balmori’s first choices but they met her criteria.

For the obverse of the gold $5 coin, the panel urged an allegorical design featuring the figure Lady Liberty holding the 15-starred U.S. flag over Baltimore’s Fort McHenry.

It was Francis Scott Key’s view of the garrison’s huge 42-foot by 30-foot flag flying during a morning attack on Sept. 14, 1814, that inspired his poem and later, song.

For the reverse, the commission urged a combination of two designs, with the phrase o say does that star spangled banner yet wave over a fluttering image of the flag and, taken from another design, the placement of some of the required lettering, around the edge of the coin.

For the obverse of the silver dollar, the commission endorsed the image of the privateer Chasseur under full sail with the lettering war of 1812.

For the reverse, it urged an image of the billowing flag that inspired Key to write what in 1931 became the national anthem of the United States.

The designs will go before the Citizens Coinage Advisory Committee July 26 before being sent to Treasury Secretary Timothy Geithner. He will have the final say on the design of the two commemorative coins.

Congress last year authorized the U.S. Mint to strike up to 100,000 gold coins and up to 500,000 silver dollars to mark the 200th anniversary of the Battle of Baltimore.

As he did at the commission’s previous meeting, Edwin Schlossberg of New York played a key role in which coin designs the panel ultimately endorsed.

The commission’s newest member, Schlossberg pushed for the lady Libertydesign calling it “the most coherent and balanced” of the 10 designs presented by the Mint for the gold obverse.

Three of those designs showed Columbia holding the billowing flag with the Baltimore fort in the background. One showed a schematic design of the fort as it was attacked by British ships, and six others showed images of American troops defending the base.

For the reverse of the gold coin, the Mint had offered eight designs. Four showed Key as he watched the British bombardment of the Baltimore fort from a British warship where he was being held. Two of the designs showed the opening notes of the anthem, one with Key’s image in the background and two others displaying his handwriting of the opening phrase o say can you see.

The committee liked the way one of those designs had placed the inscriptions united states of america, e pluribus unum and Five Dollars around the periphery of the reverse.

It urged that that “template” be used with another design to avoid any suggestion that the phrase e pluribus unum was part of the anthem.

Schlossberg, an artist who also teaches at Columbia University, had an important say in what designs would be recommended for the silver dollar.

He recommended that the word “privateer” be removed from the proposed obverse design and commission chairman Earl A. Powell III urged a second ship be plucked from the background.

Don Everhart, the Mint’s chief engraver, urged the panel not to recommend that the boat be depicted without any water, as one member of the panel hinted; the boat was a key component in what then was a U.S. Navy composed of privately owned ships.

“Most agree that a ship should be in water,” chuckled Powell, who recalled he had served in the Navy.

Everhart agreed to the removing the word “privateer” from the design and suggested that the ship could be lowered on the coin as a result.

The Mint offered six designs for the obverse of the silver dollar, all depicting various aspects of the war at sea. Several featured the Chausseau and one the USS Constitution (Old Ironsides).

For the reverse, the Mint offered nine designs, all of which offered views of the flag. Some featured the flag as it appeared in 1814 when Key wrote what he called “The Defence of Fort McHenry.” Others showed that flag accompanied by a modern flag; a flag with a sextant; notes from the opening of the song placed underneath a stylized flag; two flowing flags held at the top by an eagle with shield and banner; and being held by Lady Liberty.

None of those designs provoked much comment during the commission meeting.

Bill Pencek, executive director of the Maryland 1812 Bicentennial Commission, which will benefit from surcharges on the coins, said his group was “very much on the same wave length” as the commission on which designs it favored.

He also candidly noted that the state commission viewed the coins as a fundraising tools for its programs.

If all the coins authorized are sold, the commission could receive $8.5 million in surcharges.

The gold coins could raise $3.5 million, or $35 from each gold coin. Another $5 million could come from the $10 surcharge on each silver dollar. ¦

An earlier version of this article mistakenly identified the figure of Lady Liberty on the recommended gold coin's obverse as Columbia and misspelled the name of the privateer.