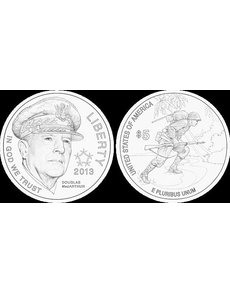 Gen. Douglas MacArthur will appear solo on the obverse of the gold $5 coin commemorating the nation’s five-star generals. The Commission of Fine Arts recommended these designs for the coin. 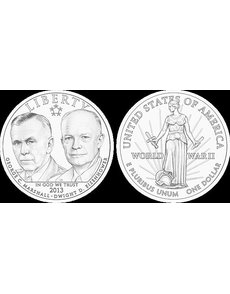 Gens. Dwight D. Eisenhower and George C. Marshall will appear on the silver dollar in the program. The CFA recommends these two designs for the coin. Both choices differ from the recommendations of the foundation that will benefit from sales of the coins. 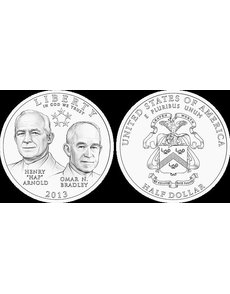 The copper-nickel clad half dollar in the program will honor Gens. Omar Bradley and Henry “Hap” Arnold. Shown are the CFA’s recommended designs for the coin.

The U.S. Mint has decided that Gen. Douglas MacArthur gets the gold coin in a set of three coins to be issued next year.

When Congress approved coins for the nation’s five-star generals it didn’t specify how the five men being honored in the program should be placed on the three coins.

So the Mint’s decision is to give MacArthur the honor of being alone on the gold $5 coins, Mint officials told the Commission of Fine Arts on June 21. The commission reviewed the coin designs plus designs for congressional gold medals honoring Native American code talkers who served in the U.S. military (see related article, page 32).

Gens. Omar Bradley and Henry “Hap” Arnold will be on the copper-nickel clad half dollar.

Mint officials said they reached these conclusions after consulting with the Command and General Staff College Foundation at Fort Leavenworth, Kan., which will benefit from surcharges on the coins.

The commission endorsed designs for all three coins after Mint officials revealed the proposed placement of the generals.

When asked whether the Mint ever placed two heads on the same side of a coin, Harrigal recalled the Wright brothers’ 2003 silver dollar.

The 1990 Eisenhower Centennial silver dollar carries a dual image of the former president as a general and a civilian, noted Thomas Luebke, commission secretary.

For the obverse of the gold coin, the CFA recommended a design showing a close-up portrait of MacArthur with a five-star ring.

Commission member Edwin Schlossberg said it was a “better portrait” of the general than the foundation’s recommended design, which shows the World War II general from a chest-high view.

The Mint presented six views of MacArthur for the obverse and also had him wading ashore on a Philippines beach in one of the 10 proposed reverse images.

For the reverse, the panel urged an image of a soldier storming a Pacific Island beach. It also urged that the $5 value be spelled out on the bottom rim, and the “E Pluribus Unum” be moved to the two o’clock position on the rim.

For the silver dollar, the commission urged twin portraits of Marshall and Eisenhower rather than a foundation-recommended portrait of the two generals against a striped background.

Schlossberg again held sway in this selection, saying the design he recommended was “more balanced” than the foundation’s selection. The commission also urged that the size of the word “Liberty” on the rim be reduced so the letter “y” would not fade into Eisenhower’s head.

In all, the Mint presented eight designs for the obverse of the silver dollar, each showing both generals.

For the reverse of the dollar the panel selected a design taken from the World War II Victory Medal showing the allegorical figure Nike standing victorious with a broken sword in her hands. Schlossberg called it “really elegant.”

The foundation prefers a view of the World War II medal against a map of Europe, a design that commission member Witold Rybczynski said he found “almost corny.”

For the copper-nickel clad half dollar, the commission recommends a design showing Arnold and Bradley with a five-star insignia between them.

For the reverse the panel urged a design showing the coat of arms of the Fort Leavenworth-based Command and General Staff College, a school all of the generals attended.

The foundation had urged a design showing a lamp of knowledge above the wording “U.S. Army Command and General Staff College” in incuse lettering.

The Mint presented five designs for the reverse and six designs of the two generals for the half dollar.

All the designs will go before the Citizens Coinage Advisory Committee, which meets in Washington June 26.

The recommendations from both the commission and committee will be forwarded to Treasury Secretary Timothy Geithner, who has the final word on coin designs. ¦