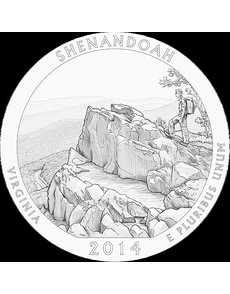 The Commission of Fine Arts found “trite” a proliferation of hikers on designs for the 2014 America the Beautiful quarter dollars but did recommend one design — for Virginia’s Shenandoah National Park — showing a hiker in the scene. 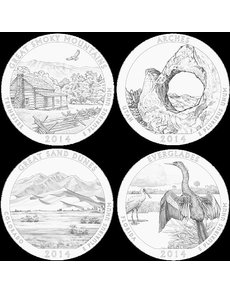 Recommended designs by the commission for the 2014 America the Beautiful quarter dollars for Tennessee, Utah, Florida and Colorado are shown clockwise from upper left. 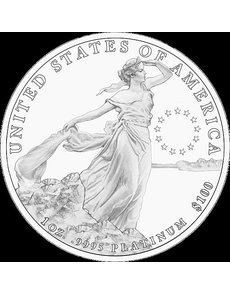 The CFA’s recommendation for the Proof 2013 American Eagle platinum coin reverse shows an allegorical image of a young woman looking to her left. The commission recommended the circle of 13 stars and the horizon line be removed. 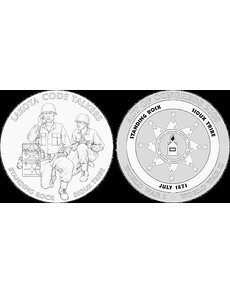 Several superintendents of the national parks and historic sites to be honored with America the Beautiful quarter dollars in 2014 had a common request after being shown designs under consideration with the U.S. Mint for the coins.

“Why not add a day hiker?” they suggested.
The U.S. Mint complied.
Earl A. Powell III, chairman of the Commission of Fine Arts, was not amused.
“I really find it trite,” he declared Nov. 15 as the commission discovered hikers on the proposed coins for three of the five national parks — Shenandoah National Park (Virginia), Arches National Park (Utah) and Great Sand Dunes National Park (Colorado).
The CFA recommended only one hiker design, for the Shenandoah reverse.
The hikers got the boot in the CFA’s other recommendations to Treasury Secretary Timothy F. Geithner, who must render final approval. Geithner, or his designate, will have the final say on what designs will go on the coins.
Here’s what the CFA, in discussions largely led by commission member Edwin Schlossberg of New York, recommended for the five quarter dollar reverses:
??Great Smoky Mountains National Park: The recommended design shows a log cabin set against a mountain in eastern Tennessee. A hawk circles overhead in the recommended design that Schlossberg called “the most attractive.” None of four proposed designs had hikers.
??Shenandoah National Park: A hiker is looking into a wide Virginia valley from a rocky crag on Little Stony Man Mountain on the recommended design. Four other designs showing the same mountain, including three with hikers and one with a bear, were also presented.
??Arches National Park: The commission recommended Double Arch from the Utah park for the coin from seven designs showing various limestone arches. Only one of the two arches at Double Arch is clearly visible in the selected design. Schlossberg said he liked the recommended design because of the way the arch was placed on the coin.
??Great Sand Dunes National Park: Schlossberg was influential in this selection, too. The design he endorsed seeks to portray the various geographic zones — grasslands, sand dunes and mountains — found in this Colorado park. Donald Everhart II, the Mint’s lead sculptor-engraver, assured the commission that the different zones could be clearly shown on the endorsed design. The design could use frosting to portray a river, the dune and forested mountains. Seven designs, some with hikers, were offered by the Mint.
??Everglades National Park: The commission endorsed a design showing two waterbirds in the Florida park, but recommended a cloud be removed from the design as unnecessary. For this reverse, the Mint presented nine designs, ranging from an image of a Native American in a dugout canoe to a design showing both a crocodile and an alligator.
The same designs were scheduled to be presented Nov. 27 to members of the Citizens Coinage Advisory Committee. That panel also will make recommendations to Geithner.
The CFA also reviewed designs for two other Mint projects.
Proof platinum American Eagle
For the reverse of the 2013 Proof American Eagle 1-ounce platinum coin, CFA members recommended an allegorical image of a young woman looking to her left to portray the Preamble to the Constitution’s message of “Promoting the General Welfare.”
The commission, at Schlossberg’s urging, agreed to recommend that a circle of 13 stars and a horizon line be eliminated from the design.
Eight images were presented for the reverse, several using allegorical figures. One rejected design showed two eagles building a nest and another showed two hands holding a basket of fruits and vegetables.
The 2013 release is the fifth in a six-coin series of commemorative reverses bearing designs reflecting the ideals embraced in the Preamble to the U.S. Constitution.
The narratives for the six proposed reverse themes from which designs were executed were rendered by John Roberts, chief justice of the United States.
Code Talkers medal
For the obverse of a congressional gold medal to be presented to the Lakota code talkers of North and South Dakota’s Standing Rock Sioux Tribe, the panel recommended a design showing two kneeling Army infantrymen sending a message over a radiotelephone.
Schlossberg urged that the design be revised to remove one of the soldiers’ feet from interrupting the wording on the lower rim of the coin.
For the reverse of the medal, they recommended a design showing the tribe’s seal, rejecting another design that had added a schematic design of a bison hunt to the tribe’s seal.
The U.S. Mint is preparing medals to honor the 25 Native American tribes that offered their members to serve as Code Talkers for U.S. forces during World Wars I and II.
The Code Talkers relayed critical military intelligence in their native languages that enemy forces could not decipher.
The medals are authorized under the Code Talkers Recognition Act of 2008, Public Law 110-420.