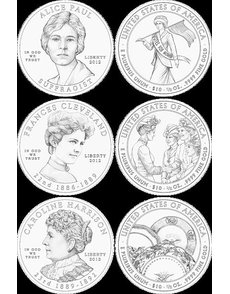 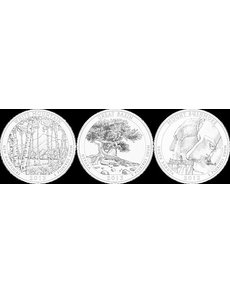 The Commission of Fine Arts recommended these designs be used for the 2013 America the Beautiful quarter dollars for New Hampshire, Nevada and South Dakota. The panel did not recommend designs for the 2013 Ohio and Maryland coins.

The Commission of Fine Arts approved designs for several but not all of the 2013 coins it examined during its Oct. 20 meeting in Washington, D.C.

By the time the Mint’s 45-minute presentation was over the panel had declined to select designs for the 2013 Francis Cleveland (second term) First Spouse gold coin and two of the 2013 America the Beautiful quarter dollars.

For the Great Basin National Park in Nevada it urged a design showing a gnarled bristle cone pine, one of the oldest trees in America.

For Mount Rushmore National Memorial in South Dakota, it urged a view of workers hanging from ropes as they carved the faces of the presidents.

The commission rejected all designs for the Fort McHenry National Monument and Historic Shrine in Maryland.

Committee chairman Earl A. Powell III complained that the four Mint designs were “more about soldiers than forts” and urged that the Mint consider an aerial view of the Baltimore fort’s unique design.

Cynthia Meals Vitelli, the Mint’s presenter, thanked the commission for its views and promised to relay them to Mint officials.

The First Spouse program for 2013 calls for a gold $10 coin and bronze medal bearing the image of suffragist Alice Paul to be issued along with two coins and medals for Francis Cleveland, whose husband served two nonconsecutive terms as president, and a coin and medal for Caroline Harrison, wife of Benjamin Harrison.

The Alice Paul coin was directed by Congress to be placed in the First Spouse series because President Chester Arthur was a widower when he served as the 21st president.

The commission urged a frontal view of Paul for the obverse of the Paul coin and opted for a view showing a woman carrying a banner “Votes for Women” and an American flag for the reverse. Because Cleveland served two interrupted terms, he gets two coins in the Presidential dollar series, and his wife gets two in the First Spouse series.

For the first term, the commission backed a view of Frances Cleveland with a coy smile and a tilted head. For the reverse, they urged a design showing her shaking hands with three women at one of her Saturday receptions for working women. The panel liked that design because it showed the figures were happy to be with the first lady, unlike other designs that they considered too somber.

For the Caroline Harrison coin, the commission selected a left-facing profile. For the reverse they picked a design showing several White House china designs. China and china paintings were avocations of Mrs. Harrison, the Mint said.

After finding little support for any of the designs for the Cleveland second term, Powell announced, “We’re going to pass on this one.” The commission’s members made no recommendation for either side of that coin. ¦