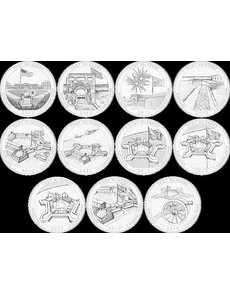 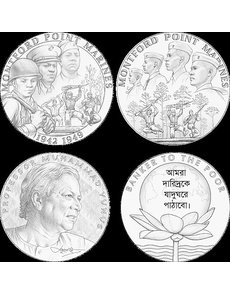 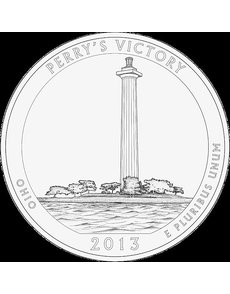 The Commission of Fine Arts recommended this design for the 2013 America the Beautiful quarter dollar for the Perry Victory and International Peace Memorial in Ohio.

The Commission of Fine Arts has rejected for a second time the United States Mint’s proposed designs for a quarter dollar to recognize the Fort McHenry National Monument and Historic Shrine.

That’s the Baltimore military post whose resistance to the British in 1814 during the War of 1812 inspired what has become the National Anthem.

Meeting in Washington Feb. 16, the panel endorsed a design for another 2013 quarter dollar in the America the Beautiful series with a War of 1812 theme — one to mark Oliver Hazard Perry’s victory over the British on Lake Erie and the International Peace Memorial on the lake.

Approval of that design for the Ohio coin came only after an artist on the panel described the design as “the most boring” of the eight options the Mint submitted.

But sculptor Teresita Fernandez, who was highly critical of the Mint’s submissions, said it was the only one of the designs for the Ohio quarter dollar she could support. Her selected design shows the 352-foot high tower that rises from a group on trees on a small island in the lake.

Other designs showed a statue of Oliver Hazard Perry, the American hero of that battle with the tower in the background. Five other designs also showed the tower, one with a ghost fleet from the War of 1812 and three with the “Don’t Give Up the Ship” cry that originated with U.S. forces in that battle.

Commission Chair Earl A. Powell III, director of the National Gallery of Art, seized Fernandez’s suggestion and within a few seconds, her choice had the commission’s unanimous backing.

The panel rejected the designs for the Ohio and Maryland quarter dollars at its meeting in November and asked Mint officials to bring it new designs to review.

When the commission took up the 11 Fort McHenry designs at the Feb. 16 meeting, Powell was far from delighted.

He was upset that the Mint had failed to heed his suggestion that Fort McHenry’s unusual five-pointed walls should be used as seen from the air.

During the Feb. 16 meeting, the Mint offered 11 views of the fort, seven of which were aerial views. But Powell did not like the angles at which the fort was depicted on the designs nor was he happy that some parts of the fort had been cropped out of view in some designs.

“Try it again,” was his terse advice to the Mint.

The designs for the coins are scheduled to go before the Citizens Coinage Advisory Committee on Feb. 28. That panel also rejected initially proposed Mint designs for the two 2013 quarter dollars.

Faced with design rejections by both panels at their November meetings, Deputy Mint Director Richard A. Peterson told his engraving staff to produce new designs.

It was not immediately clear if Peterson would order a third effort on the Fort McHenry coin to satisfy the CFA.

Historically, the CFA has been more approving of Mint designs than has the CCAC, which is largely composed of coin collectors and does nothing but review designs for coins and medals and make recommendations on future commemorative coin subjects.

The CFA is composed of architects, designers and artists, who spend most of their meetings discussing proposed federal buildings and monuments for the nation’s capital.

In reviewing designs for two congressional gold medals at the Feb. 16 meeting, sculptor Fernandez declared she was outraged by some of the designs that were supposed to depict African Americans and Asians.

Her comments came as the commission discussed proposed congressional gold medals for the Montford Point Marines, the first Marine unit composed of African Americans, and Dr. Muhammad Yunus, a Bangladeshi economist and leader in the fight against world poverty.

Fernandez said some of the women depicted on the Yunus designs were “clearly Caucasian women,” not the Asian women that Yunus has been aiding. She chided the Mint to be more racially aware of its designs.

Other aspects of the designs were bad, she said, questioning whether the feet on a dove on one of Yunus reverse were accurate. She said that reflected “very, very poor quality.”

The commission ignored the wish of Nobel Prize winner Yunus in making its recommendation.

Yunus likes a design showing his image against one of the colorful textile patterns from his native Bangladesh.

The commission, however, likes a design that showed him more in a profile with a textile pattern in the background and his signature.

For the reverse the panel favors a design showing a lotus blossom that appears under the words “banker to the poor.” The blossom carries in his native language the words “Let us send poverty to the museum.” The commission urged that the blossom be reduced in size.

Diana Balmori, a landscape architect, also was sharply critical of the Mint designs, as she has been previously.

But it was Fernandez, a new member of the commission, who added the racial issue again during the discussion of the Marines depicted on the Montford Point medal designs.

Fernandez said the Mint had made one of the three men in an iconic photo of log jumping into a Caucasian.

For the Montford Point Marines medal the commission took one of the Mint’s proposed designs and reworked it in making their recommendation. The commission suggesting that the portraits of the three men be expanded to fill the medal.

The panel then recommended that the log-jumping scene, shown on that obverse or the one on another design, should be placed on the reverse instead of a scene of Marines marching in formation, which was depicted on several of the proposed reverse designs.

Powell said the new reverse should carry the same wording appearing on all of the reverse designs. That wording would read “for outstanding perseverance and courage that inspired social change in the Marine Corps.” It would also carry the dates of the unit’s activation, 1942 to 1949, and the lettering “Act of Congress 2011.”

The unit was named after Camp Montford Point, a North Carolina base where the black Marines were trained apart from white Marines who were stationed on the larger Camp Lejune.

Fernandez said she believed that the designs were so poor that many of the individuals depicted on the six proposed obverses and six reverses were not African American.

North Carolina architect Philip G. Freeton, the newest member of the panel, agreed that the racial identify of many of the black Marines was not clear.

Members of the Montford Point Marines, about 300 of who are still alive, had indicated they preferred the design showing the three African American men and the log-jumping exercise. ¦