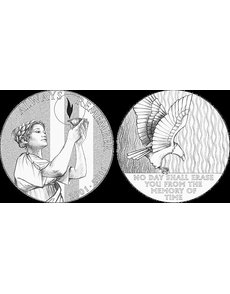 The Commission of Fine Arts recommends these designs for the National September 11 Memorial and Museum Commemorative medal, to be sold to help raise funds for a museum and memorial.

The Commission of Fine Arts Feb. 17 endorsed a classical design for the obverse of the U.S. Mint’s silver medal to be issued this year for the 10th anniversary of the 9/11 terrorist attacks and a patriotic theme for its reverse.

In recommending designs for the medal, the panel rejected more modernistic designs and ones filled with symbolic images of New York’s Twin Towers and the Pentagon, which were hit in the 2001 attacks.

The medal is being issued to commemorate the events of Sept. 11, 2001, and to help finance the National September 11 Memorial & Museum. The museum and memorial, to be constructed at the site of the former World Trade Center in New York City, “are being built to honor memory and in doing so to educate for a better future,” according to the museum’s Web site.

For the obverse, the commission selected a design showing Liberty as a young woman with a garland in her hair and a flame of hope in her hands.

The selected reverse shows an eagle with wings outstretched against a shimmering waterfall. Under the eagle would be a quote from the Roman poet Virgil: no day shall erase you from the memory of time.

The commission urged two design changes to the Mint’s proposed obverse, requesting that the circle be removed from around the flame and that two symbolic shafts of light behind the woman’s hands be removed.

Commission Vice Chair Pamela Nelson said the recommendations are in keeping with the panel’s concern for simple designs on the nation’s coins and medals and in part a belief that the symbolism of the two shafts would be lost on many people.

The commission’s recommendations now go to Treasury Secretary Timothy Geithner, who will have the final word on the designs.

Members of the Citizens’ Coinage Advisory Committee, another advisory panel that reviews coin and medal designs, will also review the designs, on March 1. Their suggestions will also go to the Treasury secretary.

A Mint official said members of the New York congressional delegation were briefed shortly before the Fine Arts meeting on the proposed designs for the medal that will be known as the “National September 11 Memorial and Museum Commemorative.” No mention was made during the commission meeting about the controversy over a privately produced medal being marketed by National Collector’s Mint of Port Chester, N.Y., as a 10th anniversary souvenir of the attack.

Sen. Charles Schumer and Rep. Jerrold Nadler, both Democrats who played key roles in Congress’ approval of the U.S. Mint medals, have urged the Federal Trade Commission to block the production and sales of what they have described as bogus commemorative coins.

The company has rejected the lawmakers’ claims, saying it has already donated $2 million to 9/11 charities. It also said its efforts to work with the memorial, now under construction in Manhattan, were rejected.

The museum and memorial is, however, actively working with the U.S. Mint on the medal now under advisory panel review, which will be sold at the memorial.

Under legislation signed Aug. 6 by President Obama, the Mint is authorized to produce 2 million of the silver medals over the next two years.

A $10 surcharge on the sale of each medal has been authorized for the New York museum. That means the memorial could gain up to $20 million if all the medals are sold.

Nelson, a Dallas artist, presided over the commission as it unanimously selected the two designs from 10 obverses and 16 reverses prepared by Mint artists.

Don Everhart, a sculptor engraver from the Philadelphia Mint, told the panel that the artists had struggled to capture the significance of the medals, hoping to produce a “simple, yet concise” statement of what the attacks meant to most Americans.

They decided against showing any buildings and came up with designs that are both abstract and symbolic as well as classical in their motifs.

A number used swamp oak leaves, a design selected because of oak trees being planted at the memorial site. One shows leaves falling into a pond with two shafts of light, representing the towers.

Another depicts three acorns to represent the three sites of the attacks — Manhattan, the Pentagon and Shanksville, Pa., where Flight 93, a hijacked aircraft, crashed after passengers tried to retake control of the plane.

Others show the tridents taken from the World Trade Center’s exterior; a memorial pond, now located on the site of one of the towers; and a pentagonal shape and the words “Always Remember.”

The 16 reverses use some of the same symbols: oak trees, a tree showing new growth and the phrase “Endurance, Hope, Resilience.”

Other reverse designs use the phrase “Hope, Honor, Rebirth.”

Six used Virgil’s phrase, including a large bell given by the people of London, which also shows an oak tree.

Two reverse designs depict phoenixes, the symbol of rebirth, but Nelson said she found the symbolism of shafts of light, leaves, phoenixes and tridents didn’t work. “The tridents could be misread,” she said.

To Nelson, an artist, the design of the eagle against the waterfall “looked powerful,” she said. “That’s where I’m starting.”

University of Pennsylvania urbanism professor Witold Rybczynski said the memorial is in “an urban setting. The trees seem to be a stretch.”

Nelson said she believed the designs had to be “something that would resonate with everyone.”

Jay Weinkam, director of government relations for the memorial, gave a powerful reason to use the Virgil quote. He said it will be on a solid museum wall that will separate visitors from the remains of Twin Tower victims who cannot be identified.

After a few minutes of discussion, the commission members said they agreed with Nelson’s recommendations.

“I’m very excited about this,” she told Weinkam. “I hope it goes well.”

The memorial will be dedicated this year and the museum will open a year later, he said. ¦