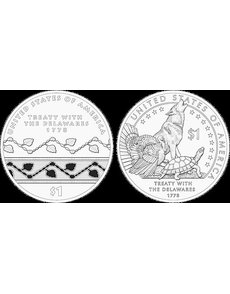 The two panels that review U.S. coin designs split on their recommendations for the reverse of the 2013 Native American dollar. Shown at left is the recommendation of the Commission of Fine Arts, with the Citizens Coinage Advisory Committee’s selection shown at right. 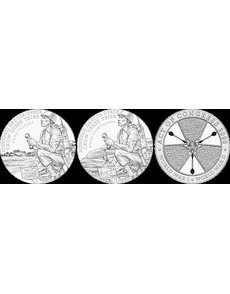 The CFA and CCAC also split over obverse designs for the Crow Creek Code Talkers medal; the CFA recommended the design at left, while the CCAC approved the design shown in the middle. The panels agreed on a reverse design that shows three tepees, right, though members of both groups recommended changes to the inscriptions. 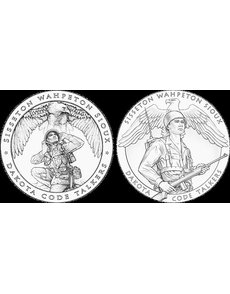 The CFA declined to recommend an obverse for the Sisseton Wahpeton Code Talkers medal, while the CCAC voted to approve the design at left. The panels recommended the same reverse, shown at right.

The nation’s two coin advisory panels have split over what image should be placed on the reverse of the 2013 Native American dollar.

Meeting within a day of each other, the Commission of Fine Arts on Sept. 20 backed a design that was based on a Native American fabric and the Citizens Coinage Advisory Committee Sept. 21 narrowly opted for showing animal symbols from tribes known as the Delawares.

The recommendations will go to Treasury Secretary Timothy F. Geithner, who will have the final say on which of the 13 proposed designs is selected for the gold-color coin that has Indian guide Sacagawea on its obverse.

The two review panels wrestled intensely over the U.S. Mint’s drawings as well as designs for two more Code Talker medals, with a CFA member expressing concern over “problematic” images. CCAC quickly rejected seven of the 13 proposed reverses for the 2013 dollar. No one on the committee expressed any interest in further discussions of those designs, so they were dropped from further consideration.

The rejected designs included pairs of hands signing a treaty, images of the treaty and animal figures taken from tribal symbols.

“After two hours of discussion, I have reached the same conclusion that the Commission of Fine Arts reached in 9 minutes,” said Donald Scarinci, a medal specialist and CCAC member.

But what CFA agreed to endorse at its comparatively brief Sept. 20 coin discussion, came in third in balloting by CCAC members on Sept. 21, where the debate was much longer.

At the CCAC meeting the design showing a howling wolf, a turkey and a turtle won the panel’s endorsement by a single point.

In voting that allowed each member of the CCAC to give each design up to three points, the three-animal design polled 11 points to finish first.

A design showing an interlocking eagle feather and a quill pen design drew 10 points to finish a close second. The fabric design, backed by the CFA, drew nine points from CCAC members.

The design will commemorate the Delaware Treaty of 1778, the first formal Indian treaty that the new United States signed. Concluded at Fort Pitt (now Pittsburgh), the agreement allowed American troops passage through the Delawares’ lands to attack a British fort at Detroit.

At the CCAC meeting, debate over the design spilled over into a discussion of whether the coins were actually celebrating Native American contributions to the nation or were marking how native people helped the European settlers who ultimately took their lands.

Historian Michael A. Ross of the University of Maryland argued that the Mint had gone too far with its plan to issue the two next Native American dollar reverses to mark the Lewis and Clark expedition across the lands of the Louisiana Purchase. At his urging the CCAC voted 7 to 0 to reject the Mint’s proposal to have two reverses in the series devoted to the hospitality that Native Americans showed the two explorers.

Ross said that some Indians believe the cooperation actually “aided the taking of their lands” in the West. Too often, he said, the reverses seem to note events that many Indians do not believe are worthy of celebration.

Regarding the CCAC recommendation to limit the Lewis and Clark coins, Ron Harrigal, the Mint’s acting chief engraver, promised that the Mint would consult with Native American groups who have been advising it about the series.

CCAC members also said they wanted to give the Mint’s artists better and more specific advice about what images would be appropriate for the next coins in the Native America series.

“I really want to pound it home to the artists — be artists,” Scarinci said.

The two panels also reviewed designs for medals to honor members of the Crow Creek Sioux of South Dakota and Sisseton Wahpeton Sioux Tribes of North and South Dakota who served as Native American code talkers in World Wars I and II.

Both panels agreed that the reverse should show the tribe’s seal, which features three tepees. But they urged that positions of proposed inscriptions be reversed, placing the inscriptions WORLD WAR I and WORLD WAR II on the upper rim of the medal and ACT OF CONGRESS on the lower rim.

The panels were also divided on the Sisseton Wahpeton medal. The CFA declined to offer a position on the proposed obverses.

“We’ll let you think about it a bit longer,” CFA Chair Earl A. Powell III told the Mint.

Edwin Schlossberg and Teresita Fernandez, CFA members, objected to the eagle on one design, saying it appears to be attacking the serviceman.

Like the CFA, CCAC members asked the Mint to determine which is the proper spelling for “Pacific Theatre,” which appears on the proposed design. The second word is spelled “Theater” on the tribal seal.

The CCAC revised its belated 2011 annual report, removing a coin to honor “Fallen Fire Fighters” from a suggested list of 2015 commemoratives.

Congress typically approves only two commemorative coin programs a year, and 2015 already has one approved coin program, for the U.S. Marshals Service.

That leaves the 150th anniversary of passage of the 13th Amendment as the CCAC’s recommended second program for 2015.

Marks said the CCAC remains committed to the proposed Fallen Firefighter coin and will work it into its recommended coin list in a future report.

The panel also increased its recommended coinage for eight half dollars that would be issued to celebrate Route 66 in 2016 to 750,000 each from a previous recommendations of 500,000 per coin. ¦