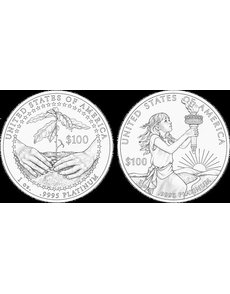 The Commission of Fine Arts’ recommendation for the Proof 2014 American Eagle platinum coin, left, brought outrage and derision at the Citizens Coinage Advisory Committee meeting. The CCAC recommended the design to the right. 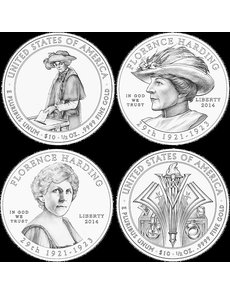 The two panels split on the designs they recommended for the 2014 First Spouse gold coin honoring Florence Harding, with the CFA’s choices shown at the left and the CCAC’s recommendations on the right. 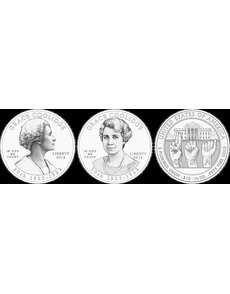 The two panels split on the obverse design for the First Spouse coin honoring Grace Coolidge, with the CFA choice at the left and the CCAC choice at the center. The two panels selected the same reverse, right, though both recommended changes involving placement of the letters USA. 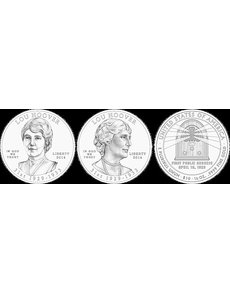 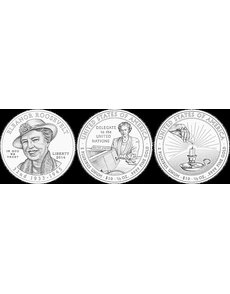 The two panels agreed on a choice for the portrait of Eleanor Roosevelt for her First Spouse coin, left, but split on their recommendations for the reverse. The CFA choice is shown at the middle and the CCAC choice at right. 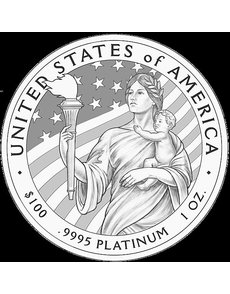 CCAC member Heidi Wastweet brought laughter with her comments on this design proposed for the Proof 2014 American Eagle platinum coin suggesting it implied that the Statue of Liberty had given birth to a baby.

Members of the Citizens Coinage Advisory Committee always have been interested in the opinions of their colleagues on the federal government’s older coin advisory panel, the Commission of Fine Arts.

But when the CCAC got word of what the CFA had recommended for the reverse of a 2014 American Eagle platinum coin, they were outraged and upset.
“I absolutely thought it was the worst,” said Michael Bugeja, director of the Greenlee School of Journalism and Communication at Iowa State University at a Nov. 22 meeting.
“It looks like something out of a gardening manual,” he declared.
What angered the normally mild mannered Bugeja and other CCAC members was the design that the CFA selected the previous day to represent the constitutional phrase “to secure the blessings of Liberty and Our Posterity.”
The CFA’s choice showed two hands planting an oak tree seedling, one of 12 designs for the Proof 1-ounce $100 bullion coin that U.S. Mint artists had prepared. It will conclude a six-coin series on phrases taken from the Preamble to the Constitution.
Sculptor Teresita Fernández had urged the CFA to accept the seedling design the previous day, calling it “something symbolic, something simple.” Her five colleagues agreed, with no debate.
But when members of the CCAC were faced with the CFA recommendation, they exploded in disbelief. Some snickered.
“I do not like the design,” said Heidi Wastweet, a Seattle sculptor who sits on CCAC. “It’s off target.”
“I simply don’t like this one,” said CCAC Chair Gary Marks. “At the very least, it’s controversial.”
Several said the planting reminded them of an Earth Day coin.
“The plant is not attractive,” complained Erik N. Jansen, a Washington state collector.
Thomas Uram, a Pennsylvania collector, said it could look like marijuana when placed on a coin.
Donald Scarinci, a New Jersey lawyer and medals specialist, announced: “I’m going to vote for the ugly one.” He didn’t in the end, and no one on the CCAC gave any support to the CFA’s selection.
Instead they backed a design that showed a young girl holding a torch, with a background showing a winding road and a rising sun. The CCAC recommended the road be removed. That design secured 23 out of a possible 30 points in balloting by members.
The results will be forwarded to Jack Lew, secretary of the Treasury, as the panel’s favored design.
First Spouse designs
The reaction to the CFA’s vote came during a daylong meeting that Marks said marked a new vision on what should go the reverses of the First Spouse coin and medal series.
Until the meeting, Marks and others on the panel had been worried that too many of the designs on the reverse of the gold coins and medals were “storybook” designs that showed a single episode in the role played by the featured first lady on the obverse.
In their votes for the 2014 coins the CCAC opted for four reverse designs that sought to symbolically capture the essence of the roles played by Florence Harding, Grace Coolidge, Lou Hoover and Eleanor Roosevelt during the presidencies of their husbands.
The men, Warren Harding, Calvin Coolidge, Herbert Hoover and Franklin D. Roosevelt, are also being honored in 2014 with Presidential dollar coins.
Marks called the CCAC recommendations on the reverses of the spouse coins “a good first step” toward more symbolic designs on U.S. coins.
The panel’s historian, Michael Ross of the University of Maryland, complained that the symbolism was “coming at the wrong moment.”
The spouses now being placed on the coins are “finally real titanic figures” whose acts deserved to be commemorated without symbolism, Ross said.
The four symbolic reverses recommended by the CCAC show:
??An art deco design of a ballot box, camera and torch, representing Harding’s role as the first first lady to vote for her husband, her use of publicity for his causes, and her work with veterans.
??Three hands showing U-S-A in sign language in front of the White House, for Coolidge’s work with the deaf. The CCAC wanted the lettering moved from the hands and placed elsewhere on the coin.
??A radio for Hoover’s first use of a radio address by a first lady.
??A candle being lit against a globe of the world for Roosevelt’s many roles as first lady.
“She [Eleanor Roosevelt] was the most important woman in the 20th century and we’re going to have a candle for her,” Ross complained.
The CFA had selected a few different designs for the reverse of the four First Spouse coins.
Its members urged Lew to have a reverse showing Harding casting a vote for her husband; Coolidge with the same three U-S-A hands, but removing the lettering from the hands; Hoover, also with the radio design; and Roosevelt as a United Nations delegate.
On the obverses, the CFA favored a hatted profile of Harding while the CCAC wanted a straight on portrait of her. For Coolidge, CFA backed a profile while CCAC backed a full-face portrait. For Hoover, CFA backed a full face view while CCAC wanted a profile. For Roosevelt, both panels agreed on a hatted, head slightly cocked view of the first lady.
Other actions
In other actions, the CCAC agreed to add to its suggested list of 2018 commemoratives a coin to mark the 100th anniversary of Air Mail service by the United States Postal Service and a coin to mark the 100th anniversary of the end of World War I.
They agreed to place a coin for Fallen Firefighters on their list for 1919 coins.
The panel also welcomed officials from the March of Dimes and discussed how they might make their planned 500,000 commemorative silver dollar issue in 1915 a sellout.
In less than 30 minutes the CFA quickly went through the same coin designs as the CCAC spent most of the day discussing.
The CCAC’s debates were often detailed, sometimes serious and other times comical.
Wastweet broke up the group with her description of an image of Liberty holding an infant.
“I hate to sound crude, but some people are going to be saying ‘I think the Statue of Liberty got knocked up,’ ” she quipped.