CFA agrees with CCAC in design selection for Girl Scouts 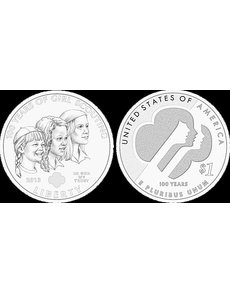 The Commission of Fine Arts recommended May 17 the same proposed designs for the 2013 Girl Scouts Centennial silver dollar, shown, as the Citizens Coinage Advisory Committee recommended during its April 26 review. 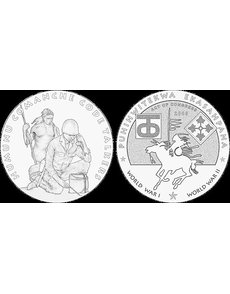 Shown above are the proposed designs for the Comanche Nation Code Talkers congressional gold medal recommended by the Commission of Fine Arts. CFA members recommended the reverse tribal symbols be reduced in size to be contained within the circular design border. 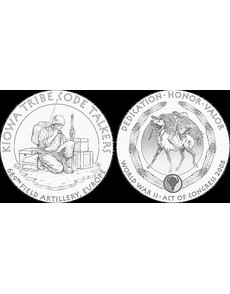 Recommended designs by the CFA for the Kiowa Tribe Code Talkers medal are shown above. The panel recommended modifications to the reverse. 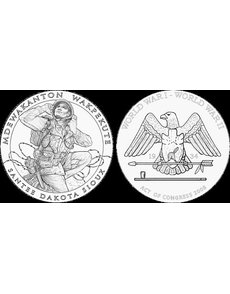 The CFA supported the above designs for recommendation to Treasury Secretary Timothy F. Geithner for the Santee Dakota Sioux Tribe Code Talkers medal. 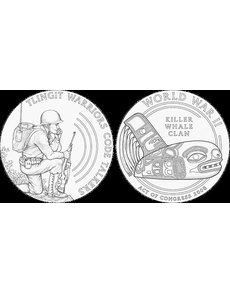 The Tlingit Tribe Code Talkers would be represented with the above designs on a congressional gold medal if given final approval by the Treasury secretary.

During its May 17 meeting, members of the Commission of Fine Arts recommended, with minor modifications, proposed designs for the 2013 Girl Scouts Centennial silver dollar and four congressional gold medals for Native American code talkers.

Thomas Luebke, the CFA’s secretary, said May 22 that CFA members concurred with the proposed obverse and reverse Girl Scouts silver dollar designs recommended by the Citizens Coinage Advisory Committee at its April 26 meeting in Washington, D.C.

Luebke said CFA supported the CCAC’s recommendation that the obverse inscription 100 YEARS OF GIRL SCOUTING be replaced with courage confidence character that appears on four of the non-recommended obverse designs. It was also recommended the numeral 100 be placed within the obverse trefoil emblem.

For the reverse, the CFA recommended that the inscription 100 YEARS below the central device be replaced with the inscription GIRL SCOUTS so that the numeral 100 does not appear on both the obverse and reverse designs, Luebke said.

The gold medals will honor the four tribes whose members served as code talkers for the military in World War I and World War II.

The recommended Comanche Nation medal obverse is based on the Comanche Code and Spirit Talker monument in Lawton, Okla.

The design depicts a “spirit talker” behind a radio talking soldier encircled by the words NUMUNU (People) and COMANCHE CODE TALKERS.

The recommended reverse carries inscriptions in the native language along with the military patches of the Army units in which the code talkers served, having the Comanche tribal logo of a horse and rider.

Luebke said CFA members recommended the reverse tribal symbols be reduced in size to be contained within the circular design border.

The panel also recommended that the rider’s shield be more simplified, Luebke said.

The recommended reverse shows a warrior on horseback, taken from the tribal seal, and a bison head and a circle of feathers. Luebke said it was recommended the split background behind the bison head be unified.

The commission’s preferred obverse for the Santee Dakota Sioux Tribe gold medal depicts an infantryman looking skyward and positioned against a backdrop of barbed wire.

The recommended Santee reverse depicts an eagle beginning to stretch its wings, with an arrowhead design on its breast. The eagle clutches an arrows in its talons, with a peace pipe below.

The panel’s recommended reverse shows one of the tribe’s “Killer Whale” ceremonial hats with the wording KILLER WHALE CLAN.

Semi-circles on the obverse and reverse of this medal would symbolize the coded messages being transmitted by the tribal members during World War II.

Luebke said the CFA did not support the CCAC’s recommendation suggesting extending the circular motif behind the whale’s tail.

Final design approval is at the discretion of Treasury Secretary Timothy F. Geithner. ¦