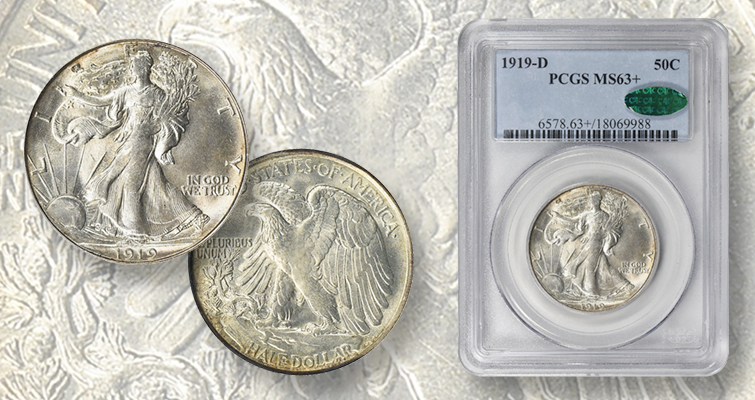 This 1919-D Walking Liberty half dollar graded MS-63+ with a green CAC sticker sold for nearly $13,000 at a Feb. 25 GreatCollections auction.

This MS-63+ coin that sold recently in an online auction shows that collectors are willing to pay for a plus sign.

An MS-63 coin need not be perfect and PCGS grading standards allow for an average or slightly weak strike with moderate marks or hairlines. For some issues, a weak strike is the norm, as seen on 1919-D Walking Liberty half dollars, where Liberty’s hand and head are rarely found fully defined on the obverse, and the eagle’s central feather details on the reverse are usually weak. Many Mint State examples have only modest luster and unattractive toning, so this moderately brilliant example with a touch of gold color at the rims and graded PCGS MS-63+ with a green Certified Acceptance Corp. sticker, from the Centurion Collection, is particularly appealing.

A massive price jump between MS-63 and MS-64 coins of this issue places pressure on nice MS-63+ coins, and this one sold for a sliver under $13,000 on Feb. 25. The price was well above the $7,500 that a typical PCGS MS-63 example brought at Heritage’s January Florida United Numismatists auction, but less than half the $28,800 that a solid MS-64 piece brought at Heritage’s recent February Long Beach sale. 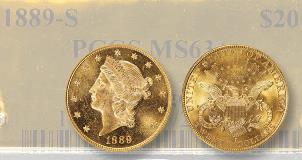 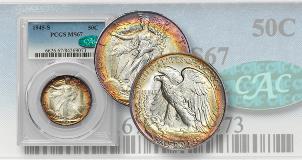 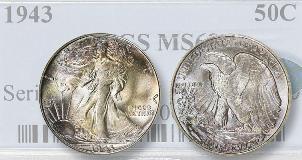