Centralized, bifacial design weakness can have many 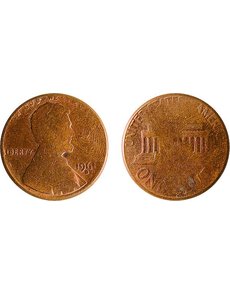 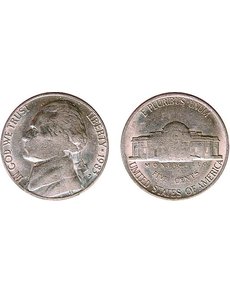 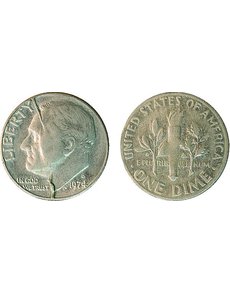 The obverse face of this 1974-D Roosevelt dime shows a die subsidence error lying in the path of a split die. On the opposite face, a shallow, featureless hollow marks where the coin metal bulged upward into the abnormal recess in the obverse die.

Some months back (Dec. 20 issue), I devoted a Collectors’ Clearinghouse column to an assortment of errors that share the same end result — weakness and loss of design elements at one pole and on both faces. This week’s column focuses on a somewhat different assortment of errors that produce weakness and loss of centrally located design elements on both faces.

For a planchet of normal size, weight, thickness and density, the most common cause of centralized weakness is a weak (low-pressure) strike. The illustrated 1961-D Lincoln cent is a typical example.

Lincoln’s bust is devoid of details. On the opposite face, a vague, incuse ghost of Lincoln was formed when coin metal bulged upward toward the recess in the obverse die and away from the reverse die. There simply wasn’t sufficient tonnage applied to the planchet to redistribute the amount of metal necessary to fill all the recesses of both dies. Persistence of the original proto-rim of the unstruck planchet provides additional evidence of abnormally low striking pressure.

A planchet punched out of rolled-thin stock will often end up looking like this 1961-D Lincoln cent. Overall effective striking pressure is reduced because the planchet is closer to the minimum die clearance and because the force delivered by the press “knuckle joint” tails off as the latter approaches maximum extension. Of course, any coins struck on thin planchets will be underweight.

Centralized weakness in conjunction with a well-formed design rim points to an entirely different scenario. This combination of features is seen in a 1983-P Jefferson 5-cent coin found by 15-year-old Alex Ness while roll-searching. The side of Jefferson’s face looks scooped-out and lacks all detail. On the reverse, the portico of Monticello is nearly smooth.

In this case, I suspect striking pressure was normal but that the planchet was too hard.

If a planchet is not sufficiently annealed prior to the strike, it resists plastic deformation.

I have seen photos of one other 1983-P Jefferson 5-cent coin with well-formed design rims and with the centralized weakness even more exaggerated. It was evidently struck by a different die pair since the Mint mark is slightly tilted. Finding two examples with the same peculiar appearance and carrying the same date and Mint mark suggests that a load of abnormally hard planchets was delivered to several presses.

A weak strike that leaves the center of the design so poorly defined will also generally show weakness in many other areas, including the design rim and adjacent design. Also, weak strikes are quite variable with respect to how much detail is present.

Since coins struck through compacted die fill (“grease”) on both faces are rather common, one might assume that this could be a frequent cause of centralized, bifacial design absence. That assumption would be incorrect. Grease accumulations strictly confined to the center of both faces are actually quite rare. When grease is the culprit, it generally finds its way to other areas of the die face. Grease also tends to be asymmetrically distributed.

On rare occasions, centralized design loss is caused by a collapsing die. While a “die subsidence” or “sunken die” error can occur anywhere (April 4 issue), it frequently develops in the center. The center of the die is the last area to heat up during annealing and tempering, and the last area to cool during quenching. Uneven heat treatment can leave an area of abnormally soft metal in the center of the die neck, and the die face can collapse into it during a press run.

The illustrated 1974-D Roosevelt dime shows a split die that bisects a smooth bulge on the side of Roosevelt’s face. This part of the die face sank in while simultaneously losing fine details. During the strike, as coin metal rose to fill the abnormal recess in the obverse die, it simultaneously withdrew from the reverse die, leaving a smooth hollow in the middle of the torch.

Split dies often straddle die subsidence errors. It is not known if the collapse of the die face precedes, follows or occurs simultaneously with the splitting of the die neck/shank.